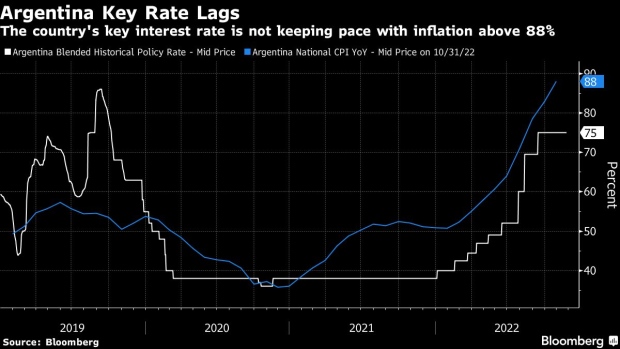 The Central Bank of Argentina in Buenos Aires, Argentina, on Monday, Dec. 6, 2021. With a recession, 50% inflation and a cobweb of failed efforts to stabilize the Argentine currency, Buenos Aires has a unique pitch to prospective remote workers: Bring your foreign currency and get more than your money would buy elsewhere - a lot more. , Bloomberg

(Bloomberg) -- Argentina’s central bank expects to keep its key interest rate unchanged at 75% until at least early next year as internal indicators show that monthly inflation is cooling, according to people with direct knowledge of the matter.

The central bank board is seeing slower monthly price gains in November and is preparing to hold its key rate if that forecast is confirmed, said the people, who asked not to be named because the discussions are private. The estimates the central bank tracks suggest monthly inflation could slow to about 5.5% in November, down from 6.3% in October.

Argentina’s strategy to curb one of the highest inflation rates in the world has combined orthodox with unorthodox measures, including reinforcing price freeze programs while the central bank raised rates to a high of 75% in September. BCRA, as the central bank is known, has held borrowing costs unchanged since then, even as annual inflation continues rising and is expected to reach 100% by the end of the year.

The central bank sees that level of 75% as an anchor that continues to draw investor interest, both from regular Argentines who put their money in time deposits and banks who purchase the central bank’s main debt notes, known as Leliqs.

The central bank board meets weekly in Buenos Aires on Thursday, but typically discusses the key rate only on the meeting after price data is released. Inflation data for November will be released on Dec. 15.

The central bank’s estimates signaling slowing inflation in November come from a slew of proprietary indicators including the PriceStats index, the people said. BCRA also tracks prices of wholesale meat, vegetable, drug and e-commerce, union wage deals and the economist survey it organizes monthly, they said.

To be sure, the central bank’s expectations for slowing monthly inflation could still be upended by scheduled price increases in the coming weeks, including authorized price increases of 40% for public transportation. Beef, which is closely watched by the government since it’s a key staple of the Argentine diet, traditionally gets marked up before the holidays. Inflation has also accelerated in December from the previous month in the last two years, before the summer break in the Southern hemisphere.

According to the last BCRA survey of economists, November inflation is expected to stand at 6.2%, little changed from October.

A recent government measure that will give soy exporters a better exchange rate than the official one will help bolster dollar reserves, the people added. The central bank’s perception is that the measure, which was previously implemented in September and brought in $8 billion, is timely because money demand rises in December, curbing the inflationary impact of such a policy.

The officials expect the gap between the official exchange rate and parallel peso rates to remain stable or even narrow in December, the people added. The central bank is confident that a peso devaluation won’t be necessary before presidential elections in October, given a slew of recent measures including the special dollar for farmers, known as “Soy Dollar” or the increase of a swap the central bank has with China.