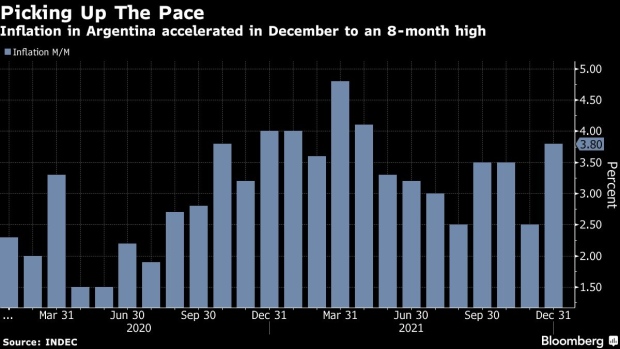 (Bloomberg) -- Argentina posted its fastest monthly inflation rate in eight months on Thursday, complicating the path to deliver a stability plan as part of negotiations with the International Monetary Fund.

Consumer prices in December rose 3.8% from November, below economists’ expectations for 4.1%. From a year ago, inflation reached 50.9%, according to government data published Thursday. It’s the second time since 2019 that Argentina ends the year with annual inflation above 50%.

Argentina’s strategy to cool inflation -- with tight currency controls and price freezes -- is a central part of negotiations with the IMF to reschedule payments on about $40 billion due to the lender. With no major progress in two years, talks hit a new impasse last week when Economy Minister Martin Guzman said the IMF is proposing spending cuts that would endanger the nation’s economic recovery from the pandemic.

Without a new deal to reschedule payments, Argentina still owes the IMF $2.8 billion on March 22, a date some analysts see as a deadline since government leaders have repeatedly said they can’t make the payment.

Officials in the administration of President Alberto Fernandez have tweaked some aspects of their unorthodox inflation strategy, but doubled down on others. The central bank raised its benchmark rate last week for the first time in over a year. Monetary authorities also accelerated the pace of the peso’s controlled devaluation, known as a crawling peg, after months of slowing it down in a failed attempt to clamp down on prices.

But earlier this week the government extended a price control program to April 7, only allowing prices on more than 1,300 household items to rise 2% a month on average, well below the pace of monthly inflation forecasts.

Economists surveyed by the central bank estimate prices in Argentina will rise nearly 55% this year.