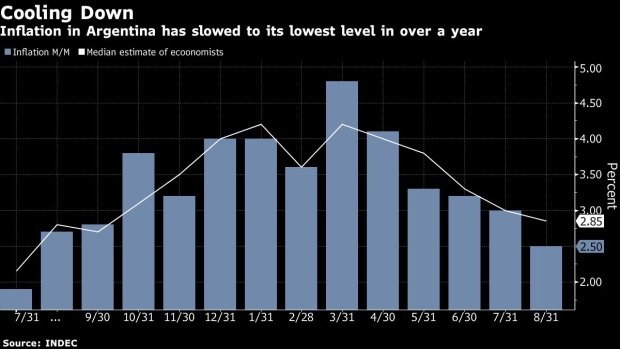 (Bloomberg) -- Argentina’s monthly inflation eased more than expected in August to a 13-month low as food and living cost increases lost some momentum.

Consumer prices rose 2.5% in August from a month earlier, the lowest level since July 2020 and less than economists’ median estimate for a 2.9% increase. From a year ago, inflation reached 51.4%, one of the highest levels since President Alberto Fernandez took office in December 2019.

Inflation has slowed since March as the government has tightened its grip on the peso’s decline, known as a crawling peg, in an effort to anchor expectations. It’s also stepped up price controls and restricted beef exports as part of its inflation strategy.

Economists expect prices to accelerate again in November, according to the central bank’s survey. The government is also preparing to boost welfare payments before the elections after a poor showing in Sunday’s primaries. Greater spending could impact prices and the peso too.