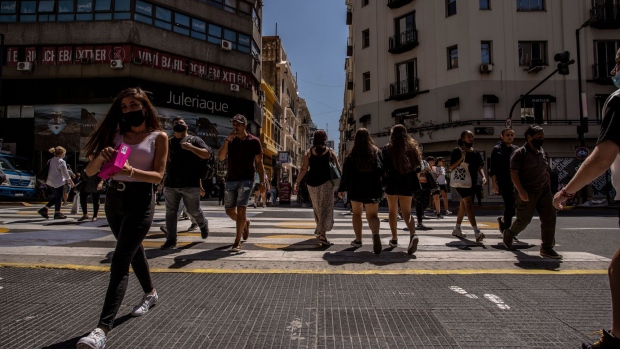 (Bloomberg) -- Argentina’s new Economy Minister Silvina Batakis vowed to continue the government’s economic plans, in a bid to stem a market plunge following a weekend filled with political turmoil in the crisis-prone nation.

In her first words since taking over for her predecessor Martin Guzman, who suddenly resigned Saturday, Batakis sought to reassure the public she wouldn’t overhaul economic policy.

“I believe in a balanced budget,” Batakis told the press in Buenos Aires after being sworn in Monday evening, without taking questions. “We’re going to continue with the economic program.”

Argentines, already battling 61% annual inflation, have yet to be convinced. The country’s black market exchange rate, widely used by the public due to tight capital controls, plunged on Monday as much as 15% to a record-low 280 pesos per dollar, before paring back some losses. By contrast, the official spot rate dropped 0.4% to 125.97 pesos per dollar.

Savers yanked money out of bank accounts with online platforms posting five minute wait times just to log on. Local businesses reported people rushing to stock up on imported goods, like coffee, fearing the price would jump soon after the depreciation of the currency. Suppliers sent companies notices that previously announced price increases had been annulled for bigger ones.

“The official exchange rate is nearly 10% stronger than it was at the end of 2021, in real effective terms, which is weighing on Argentina’s ability to boost its low international reserves. The perception that the currency is artificially strong and the country lacks the external financing to meet its investment requirements is fueling expectations of an impending depreciation and reducing investor willingness to finance the government in pesos.”

Argentina’s global bonds, which trade at deeply distressed levels near 20 cents on the dollar, indicating a high probability of default, will come under even more pressure on Tuesday when US markets reopen following a long weekend.

Batakis took the reins of economic policy after Guzman, who has been one of the closest advisers of President Alberto Fernandez since the start of his administration two and a half years ago, stunned the government by announcing his exit with a 7-page letter on Saturday.

His resignation further exposed a piercing divide between Fernandez and his powerful Vice President Cristina Fernandez de Kirchner, with frantic negotiations for over a day to come up with a new economy chief.

Batakis, a low-profile, left-leaning economist, served as economy minister in the province of Buenos Aires from 2011 to 2015. Back then, Kirchner was president and Daniel Scioli, currently production minister, was Batakis’ boss as governor of the country’s most populous district.

She didn’t respond to multiple requests for comment from Bloomberg News. In an interview with a local TV station on Monday night, Batakis gave reassurances to nervous investors on the government’s policy path.

“Argentina must fight against inflation”, she said. “Fiscal deficit is countercyclical, but it can’t be permanent, and the country needs to return to fiscal balance.”

The new minister more recently served at the national level as province secretary, a second-tier post at the Interior Ministry that’s run by top ally of Kirchner. Former officials say the role helped Batakis built relationships with Argentina’s powerful provincial governors, which could allow her to generate consensus as she navigates a divided coalition.

“She’s entering with pretty ample support because the governors know her,” Mercedes D’Alessandro, a former Economy Ministry official who directed policy on gender and equality issues until March, said. Batakis “is also keenly aware of the problems ordinary Argentines face.”

Still, Batakis won’t have any honeymoon.

Beyond inflation seen at nearly 73% by December and poverty levels reaching almost 40% of Argentines, economists forecast a recession for this year and the central bank has razor thin cash reserves to defend the peso against the brewing currency rout. The government has no access to international capital markets after defaulting on Wall Street investors in 2020. The country’s local peso debt market is shriveling up too, rolling over less debt.

Analysts warned that the growing strength of Kirchner’s far-left faction of the ruling coalition further jeopardizes Argentina’s $44 billion program with the International Monetary Fund. Kirchner is a longtime critic of the IMF and last year floated the idea of not paying back the money before a deal was reached.

Even before Batakis took over, investors doubted the government could comply with the program’s targets. Monday’s initial black market reaction suggests more losses ahead and a new inflation acceleration.

“The appointment of Batakis is a triumph for Cristina Kirchner, and hence a sign that the radicalization of the government will intensify,” Marcos Buscaglia, founding partner at Buenos Aires-based consulting firm Alberdi Partners, wrote in a note to clients. “It will bring more controls in the short run but will intensify the confidence crisis and hence the ultimate result will be a devaluation of the peso.”