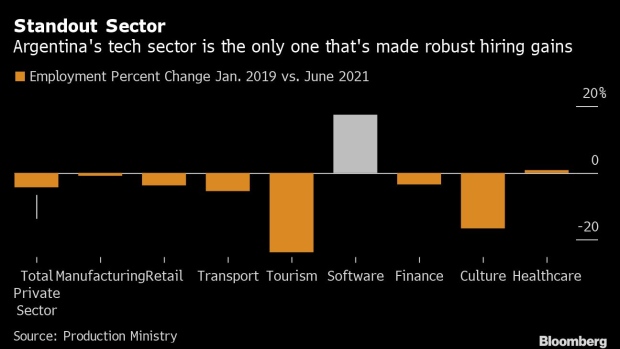 Shoppers stand in front of a store in the San Nicolas neighborhood of Buenos Aires, Argentina, on Thursday, Sept. 17, 2020. Argentine bonds fell after the government expanded restrictions on foreign exchange in an attempt to hold onto U.S. dollars as reserves dwindle. , Bloomberg

(Bloomberg) -- Argentina’s tech sector is a bright spot that’s adding jobs even as many companies shut down in a hostile environment of anti-business policies, high inflation and lack of access to international credit markets.

Tech is the only major private industry that’s gained new employers since a three-year recession began in 2018, according to data from tax agency AFIP. Manufacturing, construction, finance, tourism and transportation all lost companies over the same period. During the past two years, the number of software jobs increased 18%, while overall private sector positions declined by 4%, Production Ministry data show.

Tech companies have benefited from a recent wave of venture capital investment in Latin America. Argentine startups including Ualá, Tiendanube and Satellogic are among those increasing headcount as part of a regional hiring push. E-commerce giant MercadoLibre Inc. announced plans to create 2,800 new jobs in Argentina this year.

Those gains help to explain an unusual trend in Argentina’s recovery from the pandemic: Its economy has been creating jobs even as it loses employers. A large number of local businesses has shut down, while international companies from Walmart Inc. to Latam Airlines Group SA fled the country as they were crushed by strict labor regulations, currency controls and inflation running at 50% a year.

The latest Labor Ministry data show total private-sector jobs in August was close to the pre-pandemic level of February 2020, right before the government implemented one of the region’s strictest lockdowns for several months. But the number of private-sector employers has dropped to about 517,000 -- the lowest since at least 2008.