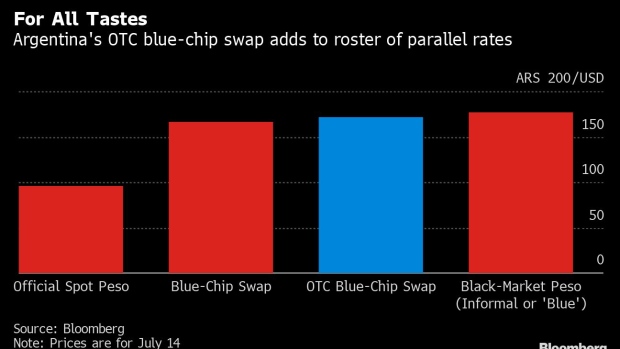 (Bloomberg) -- Government steps to regain control over the Argentina’s chaotic currency market has led a new unofficial exchange rate to rise to prominence.

It’s the third rate to become relevant since capital controls were put back in place in Argentina in September 2019, all running parallel to the official rate controlled by the central bank.

Here is a brief explainer:

Traders have started focusing on the blue-chip swap rate that trades over the counter on a platform known as SENEBI. The rate is determined by taking assets that trade locally and selling them in offshore markets for dollars. Traders prefer to use government bonds due 2030 (AL30 and GD30) because they’re the most liquid. The rate that comes from that operation is only known by the two parties involved, and doesn’t appear on online platforms.

The new exchange rate is now starting to stray away from the blue-chip that trades on open platforms and that traders can see on their screens. On Wednesday, the peso traded at 172/USD on the OTC market, according to people with direct knowledge of the matter, 3.4% weaker than on the open platforms. That spread has widened from 0.25% in the past week.

On July 12, the local securities regulator, known as CNV, set a limit to the amount of bonds that traders can sell on open, regulated platforms. The balance can’t be larger than 100,000 nominal bonds weekly, per individual or company, which is equivalent to around $35,000 or $40,000, depending on the bond used for the calculation. On the other hand, OTC trades made in the SENEBI platform don’t have any limits and can’t be intervened by regulators. As a result, broker demand for dollars has moved to the OTC market, pushing down the peso.

4. What’s the aim of these measures?

The reduction to trading volumes on the open platforms make it easier for the central bank to intervene in the spot market to keep the peso strong. The measures also curbs retail investor access to purchases of foreign currency through parallel markets.

Argentina has midterm elections in November and local investors have started purchasing dollars to protect themselves from the volatility that comes with political uncertainty. Also, seasonal dollar sales by crop exporters end in July, reducing the supply of dollars and adding to pressure to the country’s foreign currency rates. The government also considers that a slower depreciation of the peso contributes to reducing inflation expectations, another factor that could influence voters.

6. Is it the first time this happens?

Argentina has a long history of intervention in FX markets. The most recent set of major restrictions were put in place in 2019 and focused on reducing dollar purchases in spot markets to a minimum. That led dollar demand to turn to other markets, like the sale of cash dollars on the black market, or through operations like the blue-chip swap.

The most recent measure was on June 30, when the CNV president Adrian Cosentino called brokers to a meeting to request that they reduce their operations in open platforms and channel liquidity through bilateral trading.