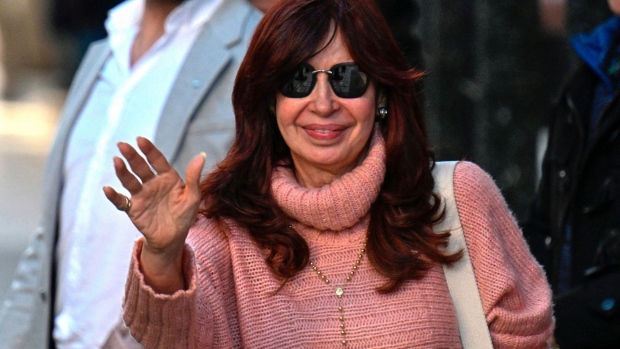 (Bloomberg) -- Argentina Vice President Cristina Fernandez de Kirchner was found guilty of fraud charges and sentenced to six years in prison by a federal court on Tuesday in a landmark case that’s likely to intensify political battles in the South American nation.

While Fernandez de Kirchner won’t need to serve the term for the foreseeable future given her immunity as vice president and head of the senate, the court decision comes less than 11 months before presidential elections, with her having hinted about a possible run. The Buenos Aires-based court also banned her from holding political office in the future.

Kirchner, 69, has the option to appeal the decision to the supreme court, dragging the process along further. To strip Kirchner of her current senatorial immunity, two-thirds of lawmakers in the upper chamber of congress would have to vote to remove it, which isn’t expected to happen given the government’s hold on the chamber.

Kirchner, one of Argentina’s most powerful and polarizing figures, was accused of graft and of allegedly leading an “illicit association” together with a construction magnate in the years she was president between 2007 and 2015, with prosecutors asking for a 12-year prison sentence. In their ruling, judges absolved her from the illicit association charge.

The vice president repeatedly denied wrongdoing and has denounced the case as a political maneuver by the opposition and members of the justice to oust her from power, saying after Tuesday’s ruling that the decision was taken by a “judicial mafia.”

“If Kirchner appeals before the Supreme Court, she may still be a candidate in the next elections for the position she wishes, since the sentence is only final when all judicial review processes have been exhausted,” said Mariano Machado, principal Americas analyst at Verisk Maplecroft, a risk intelligence company. “That would happen when the Supreme Court of Justice rejects Kirchner’s last appeal, which could take years.”

The sentencing is poised to increase political tensions in a deeply divided country and will likely galvanize the fragmented ruling coalition ahead of next year’s elections. President Alberto Fernandez, who was handpicked by Kirchner to lead the coalition despite having less political clout, sided with his vice president, calling the probe a “political” investigation.

Social and union groups linked to the ruling coalition also protested across downtown Buenos Aires on Tuesday ahead of the court’s decision.

“There is going to be fallout, and there is going to be a deepening of divisions between the various factions of the government’s ruling coalition,” said Manuel Balan, an associate professor of political science at McGill University, who specializes in Argentina and political corruption.

(Updates with analyst quotes in the fifth and eighth paragraphs)