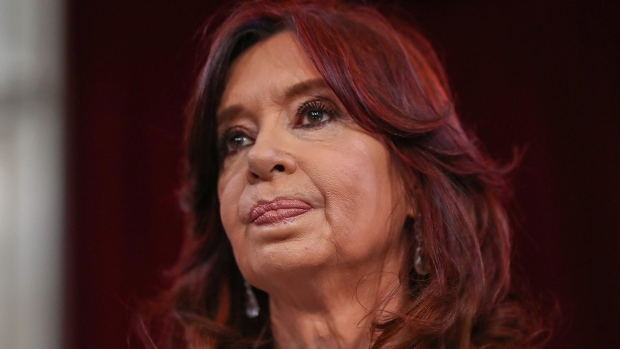 (Bloomberg) -- Argentina’s powerful Vice President Cristina Fernandez de Kirchner said she will not run for public office after a court found her guilty of fraud charges, effectively ruling out a new presidential attempt next year after initially hinting at the possibility.

Earlier Tuesday, Fernandez de Kirchner was sentenced to six years in prison and was given a lifetime ban from being in office. She is not expected to serve the term for the foreseeable future given her immunity as vice president and head of the senate.

Kirchner, who governed Argentina between 2007 and 2015, spoke live just minutes after the court decision from her Senate office, in a webcast where she rejected the ruling and said she won’t be a candidate for any political position when her term ends in December 2023. Addressing in a fiery tone what she called her opponents — including politicians, critical media outlets and the judiciary — she said they would finally have an open door to convict her.

“The true punishment isn’t the jail time, but the ban from being in public office,” she said. “But I won’t submit the political force that gave me the honor of being president twice and vice president once to be mistreated in an electoral period with a guilty candidate. I won’t be a candidate.”

Kirchner, 69, has the option to appeal the decision to the supreme court, dragging the process along further. In her speech, she hinted at a possible appeal but did not confirm it.

Before the court decision, the vice president had stoked speculation that she would potentially run for office in general elections in 2023, saying “I’m going to do whatever I have to do” to redirect the path the country’s on. Argentina’s ruling coalition is deeply divided, with politicians close to Kirchner distanced from those aligned with President Alberto Fernandez.

While the decision to not be a candidate may weaken the ruling coalition in the general elections next year, it may also galvanize her core base of supporters, giving her time to prepare her next steps, according to Ignacio Labaqui, an analyst for Medley Global Advisors in Buenos Aires.

“We’re still a long way off from when candidates must be announced, so she could always change her mind,” Labaqui said. “But from a political standpoint it’s a wise move, because she’s saying ‘I’m not afraid of going to jail, and I don’t need any sort of immunity that comes from an elected position, so I’m not afraid of you.’”

Kirchner, one of Argentina’s most powerful and polarizing figures, was accused of graft and of allegedly leading an “illicit association” together with a construction magnate in the years she was president between 2007 and 2015, with prosecutors asking for a 12-year prison sentence. In their ruling, judges absolved her from the illicit association charge.

Kirchner’s political career saga has spanned decades, from senator in the 90’s and first lady to President Nestor Kirchner at the beginning of the century, to vice president who handpicked current head of state Fernandez. In September, she survived a botched assassination attempt that stunned the nation. She also faces other corruption cases at various stages of litigation.

Her decision not to run for office opens the door for months of speculation over who will represent the ruling coalition in next year’s elections. Potential candidates could include Fernandez, Economy Minister Sergio Massa, or politicians who are closer to Kirchner, such as Buenos Aires Province governor Axel Kicillof and Interior Minister Eduardo de Pedro. Neither of them have the kind of visibility and support that Kirchner has.

Social and union groups linked to the ruling coalition protested across downtown Buenos Aires on Tuesday ahead of the court’s decision, with unrest likely to continue.