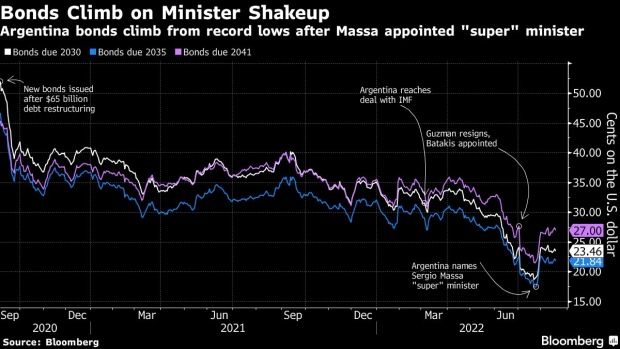 (Bloomberg) -- The rebound in Argentine debt in late July has stalled as the new economy minister races against time to convince investors he can turn his market-friendly words into actions.

The nation’s benchmark dollar bonds due in 2030 leaped more than 5 cents to around 22 cents on the dollar in just over a week amid speculation Sergio Massa would be appointed as “super” economy minister, which was confirmed on July 28. But since peaking on Aug. 8, the debt has edged lower.

For the bonds to gain any further, Massa needs to rein in inflation hurtling toward triple digits, slash the budget deficit and bolster foreign-currency reserves. The first stage in achieving any of that would be convincing grain exporters to bring revenue back into the country, boosting Argentina’s dollar holdings. That won’t be easy though.

“The market is looking for concrete measures,” said Carolina Gialdi, head of international markets sales and trading at Max Capital in Buenos Aires. “But without closing the exchange-rate gap or eliminating export taxes, I don’t see how Massa can encourage farmers to sell.”

Argentina’s gross international reserves have dipped to their lowest since December 2016, while net reserves are so low that the government may not be able to avert a one-time devaluation for much longer. But President Alberto Fernandez’s administration has repeatedly stated it would not devalue the official exchange rate, arguing that it would trigger another wave of price hikes and higher inflation, which is seen topping 90% this year.

Massa’s team is said to have asked the crop exporters and processing companies to bring as much as $1 billion into the country, offering to pay interest on the dollars, in order to boost central bank reserves. The government will also offer banks a 180-day Treasury note to invest deposits from export sales.

“There is huge urgency here,” said Alberto Bernal, chief strategist at XP Investments. “The central bank cannot keep on selling reserves, as they’re already at levels that are not consistent with financial stability.”

Last week, Argentina hiked interest rates by the most in almost three years in a bid to cool inflation already running above 70%. The nation is also moving forward with politically unpopular subsidy cuts on utility bills in a bid to comply with its $44 billion program with the International Monetary Fund.

To be sure, if the government can’t turn the situation around in the coming months, Argentina’s market-friendly opposition will likely fare better in the October 2023 presidential elections. In a best case scenario, sovereign bonds could climb to as high as 40 cents on the dollar by December 2023, Javier Casabal, a fixed-income strategist at Adcap wrote in a note.

But without making good on commitments to rein in fiscal spending and stop printing money to fund the deficit, Argentina is doomed to high inflation until then, especially if it increases social spending ahead of the elections, according to Joaquin Almeyra, a fixed-income trader at Bulltick LLC in Miami.

“Inflation will remain high if there is no real change on the way,” Almeyra said. “Fernandez’s government will try to cut some spending in the short term, but in the end they’ll fall right back into old habits when the heat goes away.”