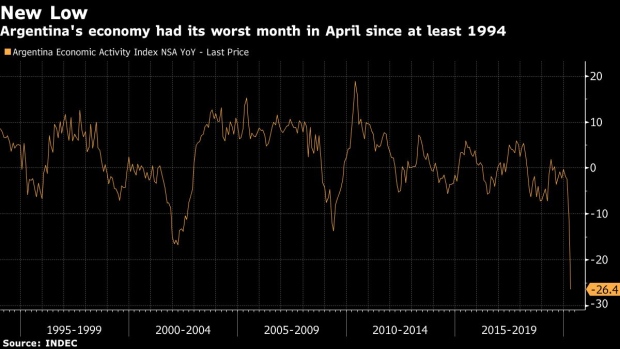 (Bloomberg) -- Argentina’s economy plunged in April as commerce ground to a halt during the nation’s first full month of a strict Covid-19 quarantine.

Economic activity fell 17.5% from the prior month in South America’s second-largest economy, and 26.4% from a year ago, the government reported Monday. That was worse than the expectation of a 23% drop, according to forecasts compiled by Bloomberg.

It’s the worst decline since the government’s statistics agency began publishing monthly data in 1993, surpassing any single month during the country’s historic 2001-02 economic crisis when the government defaulted on $95 billion in debt.

The data foreshadows more economic pain to come. The IMF and OECD forecast Argentina economy will contract approximately 10% this year after shrinking the past two years as well. The unemployment rate, already in double digits, is expected to rise still higher after private companies cut 91,000 jobs in April, the worst month of losses since at least 2003, according to government data.

Argentina’s path to recovery is deeply fogged by an extended quarantine and the government’s ongoing effort to restructure $65 billion in overseas debt with bondholders. The nation is already in default and talks stalled earlier this month. President Alberto Fernandez hasn’t rolled out a big-picture economic plan yet either. The government’s controversial plan to expropriate a major soy exporter and an airline’s surprise decision to cease all domestic operations in Argentina have also dimmed the economic outlook.

Argentina’s lockdown began March 20 and the president recently extended it until July 17.