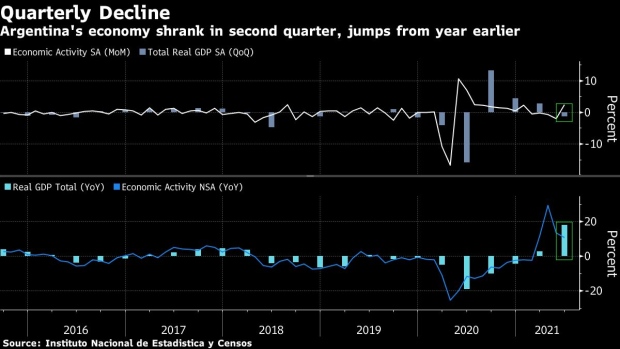 (Bloomberg) -- Argentina’s economy contracted in the second quarter as the country’s worst wave of the pandemic reduced activity and government trade restrictions cooled relations with the private sector.

Gross domestic product fell 1.4% in the second quarter compared to the previous period, compared with economists’ expectations of a 1.6% decline. From a year ago, GDP rose 17.9% as a result of the base effect from the beginning of the pandemic in Argentina, according to government data published Tuesday.

Consumer spending and exports expanded during the quarter, while imports and capital investment weighed down output. A surge in Covid-19 cases from April to June forced President Alberto Fernandez to return to a strict lockdown and halt some activities. Elevated inflation, an erratic policy mix and a temporary full ban on beef exports undercut the business climate too.

The economy’s slump comes as Fernandez’s government is trying to resurrect its election odds ahead of a general midterm vote Nov. 14. His ruling coalition lost the Sept. 12 primary elections, exposing tensions within his coalition and forcing him to overhaul his cabinet last week. On Tuesday, his administration announced borders would gradually reopen to tourists starting in October, while Argentines don’t need to wear facemasks outdoors anymore.

After three years of recession, economists expect Argentina’s economy to grow 7.2% this year, according to the central bank’s monthly survey.