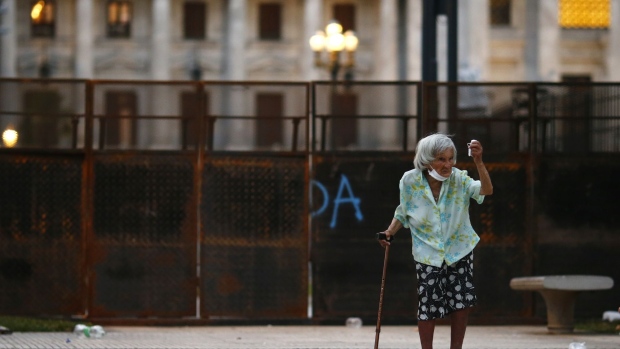 A demonstrator gestures during a protest against the International Monetary Fund (IMF) agreement as lawmakers vote on the bill outside the National Congress building in Buenos Aires, Argentina, on Thursday, March 17, 2022. Argentina’s inflation accelerated in February at its fastest pace in nearly a year, surpassing forecasts and challenging the government’s targets for this year in its preliminary agreement with the International Monetary Fund. , Bloomberg

Feletti’s departure comes after his post was reassigned from the Production Ministry to the Economy Ministry Friday, where he would have had to report to Minister Martin Guzman. Instead, Feletti announced Monday via Twitter that he was resigning. The Economy Ministry named Guillermo Hang, a member of the board of the Cenrral Bank, as his replacement.

“The discrepancies over the the path taken and economic tools chosen are what’s making me take this decision,” Feletti wrote in his resignation letter to President Alberto Fernandez, urging for “better coordination of the economic cabinet.”

Feletti is an official loyal to powerful Vice President Cristina Fernandez de Kirchner, who has publicly criticized the president for not tackling inflation. Despite a cobweb of currency and price controls, inflation is now running at its fastest pace in 30 years and remains at one of the highest levels in the world.

In his seven months on the job, Feletti bolstered the amount of products included in a stern price control program, as well as export restrictions that the business community labeled anti-competitive. Inflation continued to climb, reaching as high as 6.7% for a single month in March.

His resignation comes as government officials go through the first review of the country’s $44 billion program with staff of the International Monetary Fund.