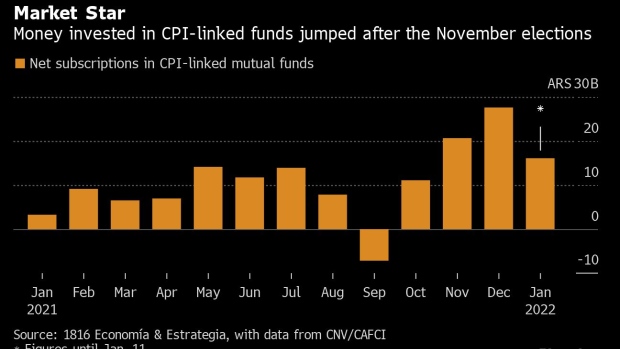 (Bloomberg) -- Investors have long been confident about at least one thing in wild and unpredictable Argentine markets: A big peso devaluation was coming, and the best place to take refuge was dollar-linked bonds.

Now, after piling into the trade for two straight years, they are throwing in the towel. They were so surprised that the devaluation didn’t come in the immediate aftermath of November congressional elections -- politically, the most logical time to do it -- that they have begun to give credence to the government’s pledge that there’s no such plan in the works. As a result, they’re rapidly scaling back purchases of local dollar bonds and instead are plowing money into inflation-linked bonds, a better haven as they see it as consumer prices soar at an annual pace of more than 50%.

“These CPI-linked funds will continue to be very attractive and very much in demand,” said Nestor de Cesare, the president of Allaria Fondos in Buenos Aires.

Argentine mutual funds that invest in inflation-linked debt have returned 54% over the past year, almost double the gains for dollar-linked debt, according to data compiled by consulting firm 1816 Economia & Estrategia. The outperformance is even more stark in the past three months -- 13.1% for inflation debt, 5.6% for dollar bonds.

While President Alberto Fernandez’s administration has been consistent in telling investors it wasn’t planning a one-off devaluation, those assurances were taken with a big dose of skepticism. Investors thought that getting rid of an overvalued currency would be an obvious step toward setting the economy on the path to long-term growth, even if it was sure to upset Argentine savers. Many also thought the International Monetary Fund would demand it as part of ongoing negotiations over rescheduling some $40 billion in loan payments.

But a devaluation didn’t emerge after last year’s mid-term election, and the government insisted that none was planned as the peso continued it’s slow but steady daily depreciation. So investors have gained confidence in the peso even as inflation accelerates.

Of course it’s possible that policy makers could decide at any point that it’s time for a big peso devaluation. The currency sells for 104 per dollar in the official market, but at 209 per dollar in parallel markets that Argentines use to skirt controls that severely restrict dollar purchases. It will get harder for Argentina to preserve the peso’s strength in the official market as its foreign-currency reserves dwindle. Net reserves, which exclude the bank’s foreign-currency liabilities, have fallen to just $1.8 billion, according to consulting firm Anker Latinoamerica.

But for now, investors are betting that inflation-linked debt will offer higher returns. Nominal rates have fallen into negative territory amid the surge in demand, with yields on government bonds due next year down to -1.8% from 6.35% in September.

The government has announced that the prices of public services will rise in the first quarter, and monetary expansion has quickened to an annual pace of 40% in December from 30% in October, putting further pressure on inflation.

Last week, the nation saw its fastest monthly inflation rate in eight months, leaving the annual rate for 2021 at 50.9%. Runaway price increases are making it harder for Argentina to present a credible plan to stabilize the economy amid its talks with the IMF to reschedule payments on about $40 billion due to the lender.

“There will be expectations of even higher inflation,” said de Cesare of Allaria Fondos.