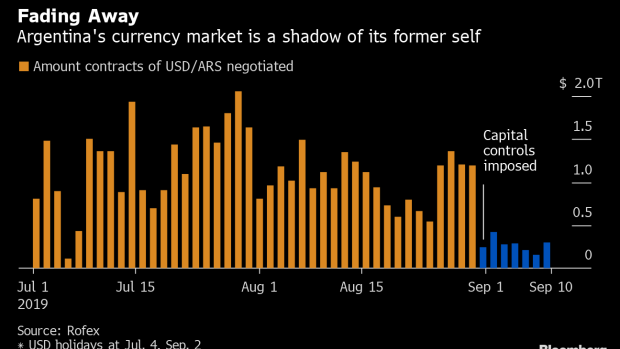 (Bloomberg) -- A year of frantic activity on the currency desks of Argentina’s major banks has just come to a sudden, juddering halt.

The imposition of capital controls on Sept. 1 slashed volumes, while stabilizing the peso, the world’s worst performing currency this year. Daily swings of as much as 15% have slumped to no more than 0.4% in the space of a week.

One trader, who asked not to be identified because she is not allowed to speak about the situation of her bank, said she no longer gets to the office early and while she’s at her desk, she spends time reading about other topics while her colleagues run errands.

Many traders are worried that their new-found calm is here to stay and their jobs are at risk. The currency controls designed to halt the slump in the peso and defend the central bank’s foreign currency reserves have pulled the rug out from under their feet. Trading has slowed to a minimum as companies are limited to only trading FX for foreign trade operations.

Bond trading has also tumbled after the capital controls prevented foreign investors getting their money out of the country easily.

Just a few blocks away from the currency desks located in the tallest towers of downtown Buenos Aires, the smaller offices of market brokers find themselves flooded with work.

The capital controls have thrown up opportunities that many ordinary Argentines have been quick to seize, including the MEP dollar. It goes like this -- people buy dollars, then purchase dollar-denominated bonds and sell them for pesos in the local market. The differential between the official exchange rate and the MEP rate earns them a 7% profit, while allowing the counterparty to get their money out of the country.

“We are barely keeping up,” said Federico Grand at Guardati Torti SA, a grain broker in Ciudad de Rosario. There, customers are coming in as many as three times a day.

The only drawback is the monthly limit of $10,000 on dollar purchases for ordinary Argentines.

“News of the trading opportunity is spreading like wildfire,” Grand said. “Some clients spent that entire limit last week alone.”

The surge in activity has also provided some relief to the now idle currency traders.

The desk is practically closed, said a trader, who works at one of Argentina’s leading banks and declined to be identified. He and his colleagues are now lending a hand at other areas of the bank to help pass the time.

To contact the reporter on this story: Ignacio Olivera Doll in Buenos Aires at ioliveradoll@bloomberg.net

To contact the editors responsible for this story: Jacqueline Simmons at jackiem@bloomberg.net, Philip Sanders, Julia Leite