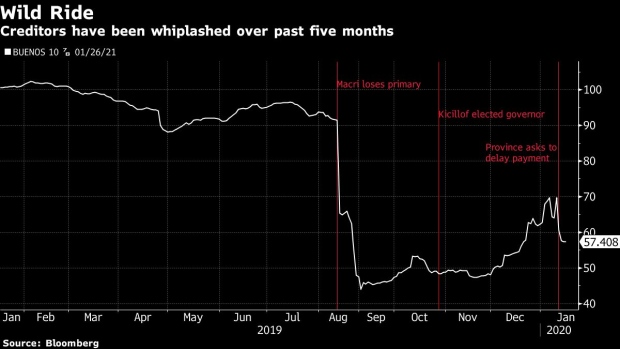 (Bloomberg) -- When Axel Kicillof, the newly inaugurated governor of Buenos Aires, took the stage Tuesday to address the province’s anxious foreign creditors, he flashed none of the brash, volatile antagonism that has made him a cult figure in some circles here.

Sure, he still sported his trademark rockabilly sideburns and open-collar look, but gone were the insults and the table-pounding that accompanied many of his public interactions with foreign investors during his stint as the federal government’s economy minister years ago. And while he delivered a tough message to bondholders -- accept our offer to delay a $250 million principal payment due Jan. 26 or risk a “disorderly” situation -- he showed restraint, keeping calm and diplomatic.

Now, as they decide whether to go along with the proposal, investors are left to wonder if this is a new Kicillof, a more mature politician who has left behind some of his most combative traits in order to work toward a sustainable, fair plan for the restructuring that everyone agrees is inevitable at this point. The Kicillof-versus-investors standoff has become the opening salvo in what will almost certainly be a broader Argentine debt renegotiation this year, with the cash-strapped national government slowly gearing up to begin its own talks with creditors.

“He’s the governor now, and has a lot more to lose,” said Alberto Bernal, the chief strategist at XP Investments in Miami, who has been following Kicillof’s career since he rose to prominence as a deputy economy minister in 2012. “The logical path in these talks is one of conversation.”

Kicillof first came on investors’ radar seven years ago when he led the federal government’s efforts to expropriate oil firm YPF SA. Most notably for bondholders, he was then-President Cristina Fernandez de Kirchner’s economy minister in 2014 when the administration defied a U.S. court ruling to pay billions of dollars owed to hedge funds led by the billionaire Paul Singer, plunging the country into its second default in 13 years. Ever since, he’s kept a close relationship with Fernandez de Kirchner, becoming one of the most prominent allies of someone reviled by investors.

Now, newly sworn in as the leader of Argentina’s most populous province, he’s asking holders of Buenos Aires’s $500 million of overseas bonds due in 2021 to agree to change the terms of the notes so that the payment delay won’t constitute a default. He isn’t offering any compensation, but insists that a standstill will allow time for a more comprehensive restructuring. The bonds are now trading at 57 cents on the dollar.

While Kicillof lobbies for investors to agree to the waiver -- 75% have to sign off for it to take effect -- there’s a subset of speculators wagering that the payment will get made one way or another. They say it’s unlikely Kicillof or the federal government will allow a hard default that will spark a legal battle. Instead, the thinking goes, the province could take out a loan or dig through its coffers to come up with the cash.

They also point out that Kicillof has been pragmatic at certain points in the past, such as when he reached an agreement over unpaid debts with the Paris Club group of credit nations and compensated Spanish oil producer Repsol SA for the takeover of YPF. And since these creditor negotiations are seen as a preview of what talks with the federal government might look like as it looks to push back its own obligations, there’s a feeling officials may want to keep things as amicable as possible.

For Joaquin Almeyra, a fixed-income trader at Bulltick LLC in Miami, it’s just too risky to bet on a friendly turn by Kicillof.

“This Province of Buenos Aires proposal stinks of deception,” said Almeyra, who dabbles in Argentine provinces but won’t touch Buenos Aires debt given the risk that Kicillof makes good on his threat and skips the payment. “It makes no sense to default on such a small amount. The situation is serious, but a default would be much more expensive.”

Optimists made the province’s bonds due in 2021 one of the world’s best performers for a stretch that ran from late August through earlier this month, producing a return of more than 50% for holders betting the Jan. 26 payments would get made. Those gains partly evaporated as the province said it would seek talks with creditors.

A similar thing happened in mid-2014, when investors bid up prices for sovereign notes anticipating that Kicillof would work out a deal with creditors to allow payments to continue, only to get burned when talks broke down and the federal government defaulted once again.

In those days, he was known as a thorn in the side of investors, particularly the hedge funds that had bought up debt from the country’s 2001 default at pennies on the dollar and then won a court order to get repaid in full. While Buzzfeed wrote an article at the time calling him “gorgeous,” Business Insider labeled him “the most dangerous politician in Latin America.”

Kicillof’s press office declined to comment about his history with investors and any plans for what happens if he doesn’t get consent to change terms on the bonds.

Born into a middle-class family, the son of a psychiatrist and a psychologist who both prized intellectual achievement, Kicillof ascended into politics through an influential student organization at the University of Buenos Aires, where he went on to earn a doctorate of economics. As a professor there, he lectured against what he labeled neo-liberal economics and wrote books on the virtues of John Maynard Keynes.

Kicillof’s track record as a hard-line advocate for government intervention in the economy earned him a spot in Fernandez de Kirchner’s administration. The day after he successfully brokered a $9.7 billion settlement with the Paris Club, the Economy Ministry decked its walls with posters of journalists, economists and opposition leaders and their quotes questioning Kicillof’s ability to reach a deal.

After a stint as a lawmaker during the administration of former President Mauricio Macri, Kicillof was swept up in the return to power for Peronists in last year’s election, when he ran for the governor’s job. But since his victory, he’s blamed the province’s previous leaders for leaving him with an economic mess and said financial woes meant there was no way debt investors could get paid without taking from the poor.

While Martin Guzman, Argentina’s economy minister, has said the administration won’t provide the province cash to make the debt payment, there might be other ways for investors to get paid. Buenos Aires could come up with the money by borrowing from the provincial bank, or re-allocating federal tax receipts, Almeyra said.

“It’s not that he doesn’t have the money, but it goes against his DNA to take money from food banks and schools to pay the debt,” said Walter Stoepplewerth, chief investment officer at Portfolio Personal Inversiones in Buenos Aires. “He really believes that you have to give to the people that have less, and take from the people that have more. And people that manage emerging market debt funds have a lot more.”

--With assistance from Sydney Maki and Jorgelina do Rosario.