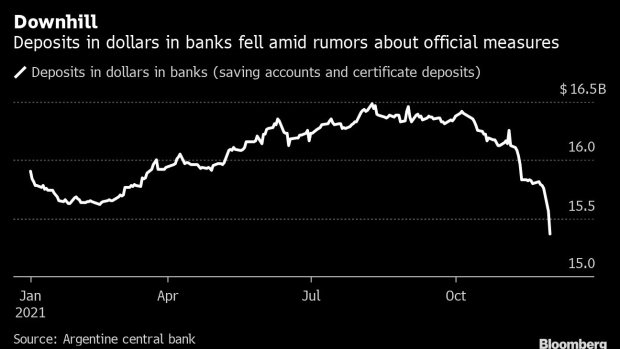 (Bloomberg) -- Argentines are yanking dollars out of bank accounts at the fastest pace in 14 months amid speculation the government will make it harder for savers to access their foreign currency.

Individuals and companies withdrew almost $400 million from the financial system in the first two days of the week, equivalent to 2.5% of deposits, according to the latest data published on the central bank’s website. The move followed new currency restrictions last week, affecting consumers and banks, which fed rumors that new limits on dollar withdrawals could be coming.

“Our clients called us with concern over the last few days, because they were confused on the reach of the latest central bank measures,” said Ariel Rivero, a trader at Buenos Aires-based Banco CMF. “The drop in deposits started as rumors spread through social networks. We explained to our clients that the latest resolutions did not affect their savings.”

For many Argentines, the rumors struck a chord almost 20 years after the government placed restrictions on withdrawals on savings just before the country defaulted on $95 billion. The central bank published on Monday a notice saying that its measures from the prior week did not affect dollar deposits and that all foreign currency deposits are backed by assets.

The latest measures come at a time in which authorities are expected to step up negotiations with the International Monetary Fund over above $40 billion in payments owed. Gross central bank reserves have fallen $4.5 billion from an August high, when the government received additional funding from the IMF in the form of special drawing rights.

“The weakness in net reserves and the low credibility of policymakers are fuel that lead any unfounded rumor to cause a fire,” said Nery Persichini, head of strategy at GMA Capital.