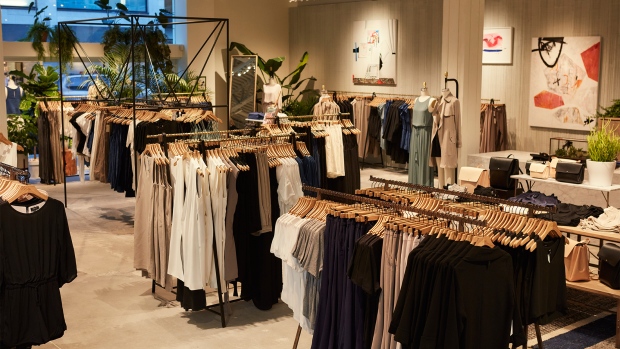 Women’s fashion retailer Aritzia has filed for an initial public offering on the Toronto Stock Exchange, marking a breakthrough in Canada’s IPO market as equity markets near all-time highs.

The Vancouver-based company designs clothing and accessories for women and has a network of 75 stores and an e-commerce business, aritzia.com

Aritzia is co-owned by founder and chief executive Brian Hill and Boston-based investment firm Berkshire Partners -- which has a majority interest. They plan to continue to control the company through multiple-vote shares.

The current owners plan to sell an undetermined number of shares at a price to be set later in the initial public offering process. The company will not receive any of the proceeds.

The filing comes as the U.S. IPO market is expected to strengthen in the fourth quarter and into next year, according to Josef Schuster, founder of Chicago-based IPOX Schuster, a research firm focused on initial public offerings.

“Equity markets are close/near an all-time highs, so interest from institutions for specialty IPOs, such as Aritzia (which are mature P/E-backed businesses with strong cash flows) should be solid (with funds having some cash to allocate to new deals), assuming the pricing is right,” Schuster said in an emailed response to BNN.

He added that investor interest in Aritzia should be boosted by the “solid performance” of Shopify, an Ottawa-based ecommerce software company that went public in May last year.

Aritzia said in its filing that it has big plans for its nascent ecommerce business. Launched in 2013, revenue from online retail accounts for 12 per cent of the company's total revenue. The company aims grow it to 25 per cent in about five years, its prospectus said.

Aritzia is eyeing expansion of its bricks-and-mortar stores in the U.S., as it plans to open 30 new stores in five years.

The Hill family opened its first store in Vancouver in 1984.

“If you look at [Aritzia’s] IPO, it’s in a space where I think there is some demand,” said Ryan Bushell, VP and portfolio manager at Toronto-based Leon Frazer and Associates, in an interview with BNN. “People are looking for those consumer names…with that non-resource exposure. I think it will do probably pretty well.”

Aritzia may be observed as a litmus test by other firms that are considering to make the leap into Canada’s IPO market.

The chief executive of Freshii, a Canadian fast-food franchise known for its wraps and salads, said he will be watching the fashion retailer’s IPO closely. Investors have been expecting Freshii to go public as well.

“(Aritzia is) a great Canadian consumer brand we admire and we’ll be watching closely,” Freshii CEO Matthew Corrin said in an email to BNN.

Here's a look at the number and gross value of IPOs on Canadian exchanges, according to data from PwC:

IPOs on the TSX from January to December 2015