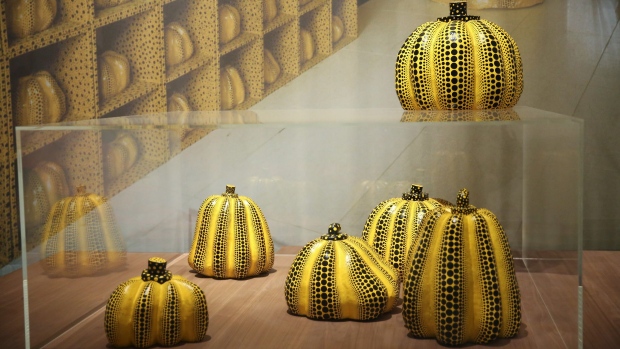 The sculpture "Pumpkin" by Yayoi Kusama is seen at the "Yayoi Kusama: A Retrospective - A Bouquet of Love I Saw In the Universe" exhibition at Martin Gropius Bau on April 29, 2021 in Berlin, Germany. , Photo by Adam Berry/Getty Images

A German art collector was sentenced to three and a half years in prison less time she’d already served after admitting to an art fraud involving the fake sale of a US$1.3 million yellow pumpkin sculpture by Yayoi Kusama.

Angela Gulbenkian pleaded guilty in London to allegations that she took the money from a Hong Kong-based art dealer but never delivered the famous polka-dotted artwork.

The socialite, who married into oil baron Calouste Gulbenkian’s family, enmeshed herself in Europe’s art world. One moment, Gulbenkian was posing for photos with the artist Ai Weiwei. The next she was brokering million-dollar art deals.

Judge David Tomlinson delivered the sentence in a London courtroom on Thursday, saying that the art collector had breached “trust and accountability.”

“Running through this criminality was a sustained obfuscation on your part,” the judge told Gulbenkian.

Gulbenkian, who’d grown used to a lavish lifestyle after her marriage, blew the proceeds of the sale on a 25,000-pound (US$34,650) Rolex watch, 56,000 pounds of artwork and a private jet flight. Her total expenditure between April 2017 and January 2018 was more than 1 million pounds, prosecutors said.

They alleged she was trading on the family name. She pleaded guilty to a second count of theft, an allegation that she conned her massage therapist out of her life savings. She told the therapist she planned to use her 50,000 pounds to invest in artwork linked to Portugal’s Gulbenkian Foundation. This year, she repaid the sum, her lawyer said.

The Gulbenkian family was “rich beyond the imagination of most people,” her lawyer David Groome said.

At the end of 2016, the Hong Kong art dealer Mathieu Ticolat fell for her too. Gulbenkian said she acted as an agent of the seller of the sculpture.

“I trusted Angela Gulbenkian because of her family name,” Ticolat told the judge. “I trusted her and I was deceived.”

He’s pursued Gulbenkian ever since the failed deal, saying that negotiating with the broker was like “dealing with someone escaping, always telling lies, fabricating emails, trying to make me believe something that doesn’t exist. It’s all a pile of lies. You’re going after a mirage.”

The 179-pound Kusama pumpkin was destined for Thailand, with the billionaire Chirathivat family set to be the ultimate buyer, Ticolat said. The sculpture, which he thought was initially undervalued, could now be worth as much as US$5 million, he estimated.

Angela Maria Ischwang -- her birth name -- moved to London from Germany in the early 2000s and in 2010 married Duarte Gulbenkian, a soccer agent and Calouste’s great-grandnephew.

With the pumpkin deal, Gulbenkian had the “best and honest intentions,” Groome said. But when the money arrived in her account, “the temptation was just too great.”

She thought she was “wrongfully borrowing the money with a clear hope and desire that she would be able to repay it,” her lawyer said.

The judge said he accepted that the activity was “not fraudulent from the outset.”

Gulbenkian has been held in prison since December 2020 after her arrest in Lisbon.

In a linked but separate civil case filed by Ticolat, Gulbenkian produced an email that she said was from the work’s owner, former Volkswagen AG chief Martin Winterkorn, that exonerated her. But prosecutors said the document was a forgery. “It was an elaborate false story,” the lawyer David Markham said.