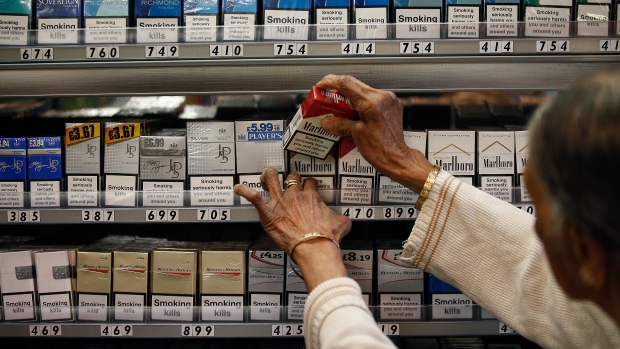 a shopkeeper selects a packet of Marlboro cigarettes, produced by Philip Morris International Inc., a unit of Altria Inc., in this arranged photograph taken behind a newsagent's counter in London, U.K., in London, U.K., on Friday, March 13, 2015. , Bloomberg

Philip Morris, spun off from Altria in 2008, sells cigarettes in 180 countries, and an alternative tobacco device called IQOS in 43. It operates in some markets where cannabis is “criminal still” Calantzopoulos said. “We have to take into account all the sensitivities of various countries,” he said.

He pointed to the Philippines as an example. President Rodrigo Duterte has led a deadly anti-drug crackdown since he took office in 2016.

“We know the positions of the president -- and, you know, we have 70 per cent market share in the Philippines -- I can only imagine if we were called and asked, in a hypothetical case, ‘what are you people doing?’” he said.

Calantzopoulos said he believes the thinking will change over time. Still, he said more study is needed on the active substances of cannabis. “The world seems to have jumped to the conclusion” that addictiveness isn’t an issue.

Altria and Philip Morris are partners in marketing IQOS, which heats tobacco instead of burning it. They are seeking regulatory approval in the U.S., where Altria would sell the product and seeks to market it as “reduced risk” compared with cigarettes.

Altria is also said to be in talks to take a minority stake in Juul Labs Inc., the e-cigarette maker that’s gained a passionate following in the U.S. with its nicotine-laced vapor. Calantzopoulos said a potential deal between the two companies reported last week won’t be a competitive threat to IQOS in international markets, as some analysts have speculated.

Juul doesn’t have “anything that is protected, or is not repeatable,” he said. “You can see plenty of products appearing from all directions like Juul, so the question is -- when you have imitation without patent protection that is solid -- if the branding is sufficient, or not.”Juul could also run into international restrictions on maximum levels of nicotine that can be used, Calantzopoulos said.

E-cigarettes will continue to evolve over the next decade, he predicted. Even though they’ve been in development since 2004, there’s a ways to go. IQOS sales have slowed in Japan, Philip Morris’s biggest market, amid competition.

Users will prefer to use IQOS over e-cigarettes when they can because it lets them enjoy real tobacco flavor, even if it’s a milder experience than smoking a real cigarette, Calantzopoulos said.

“If cigarettes are wine, IQOS is wine with ice cubes,” he said. “An electronic product is water with nicotine and a juice.”