While the US$38 billion takeover of Anadarko Petroleum Corp. has been seen as a potential catalyst for a wave of U.S. oil industry consolidation, the market for energy deals north of the border remains frigid, with few potential sparks seen on the horizon.

There have been 14 announced offers for Canadian exploration and production assets for a total value of US$30.9 million this year through Friday, according to data compiled by Bloomberg. That’s a fraction of the 33 deals with a total value of US$3.6 billion in the same period a year earlier.

It’s an even more minuscule amount when compared to the U.S., where there were 84 announced deals with a total value of US$91.4 billion this year through Friday.

The deals freeze in Canada can be traced largely to the country’s inability to get new pipelines built, which has weighed on local heavy crude prices, said Stephanie Stimpson, a partner at law firm Torys in Calgary, who works on mergers on acquisitions. That pipeline pinch prompted Alberta’s government to implement an unprecedented production curtailment late last year, adding another layer of unpredictability that’s making companies hesitant to pull the trigger on deals, she said.

“There’s just been so much volatility and uncertainty that parties have gone on hold,” Stimpson said in an interview. 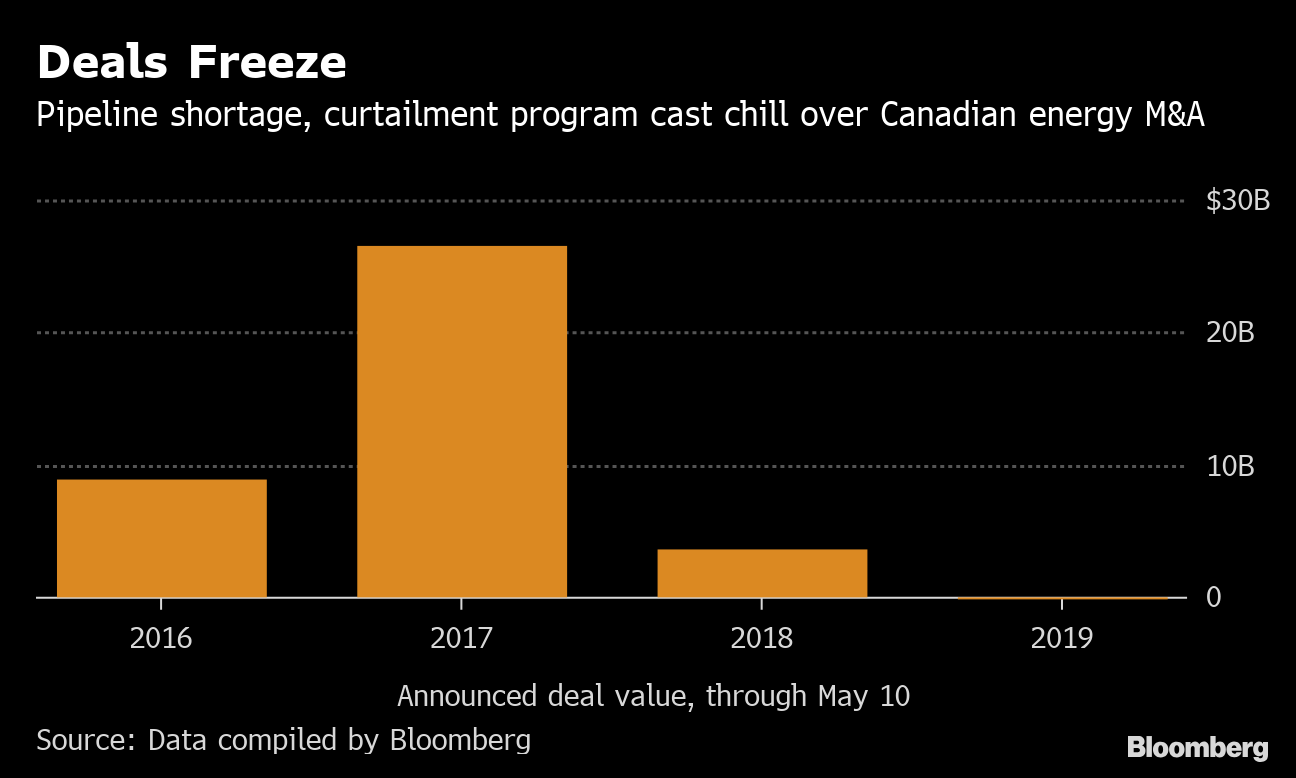 A prime example of that uncertainty unraveling potential deals took place in January, when Husky Energy Inc. abandoned its hostile $3.3 billion bid for rival oil-sands producer MEG Energy Corp. Husky had offered to buy MEG in October, before the curtailment program was implemented.

Despite winning the support of holders of more than 50 percent of MEG’s shares, which it needed to continue to press its fight, Husky backed away from the deal in January, citing uncertainty created by the curtailment and the lack of progress on new pipelines.

“That put it to a fine point that parties, even if they had wanted to transact earlier, have taken a different view,” Stimpson said.

The uncertainty also may be complicating Devon Energy Corp.’s plans, announced in February, to sell or spin off its Canadian assets by the end of the year to focus on its U.S. shale operation. Interest in the oil-sands holdings, which analysts estimated may be worth US$3.5 billion to US$6.5 billion, has been limited. In the past two weeks, Suncor Energy Inc. and MEG, two other significant oil-sands players, have said they aren’t in discussions with Devon about buying those assets.

With the curtailment program still in effect and no new pipelines expected to be built this year, there’s little indication the market will improve in the near term, Stimpson said.