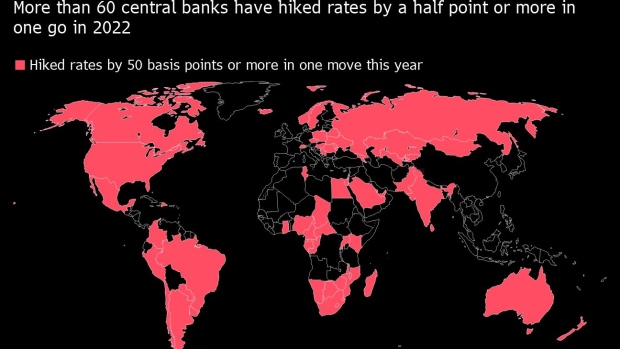 It was one of the first among developed nations to begin withdrawing pandemic stimulus last year and its decision to accelerate the pace of interest-rate increases this year foreshadowed what would come from counterparts in the US, Australia and Canada.

Now, as the Reserve Bank prepares to deliver a likely third consecutive half-percentage-point hike next week, investors around the world are treating it as a proxy for other advanced economies.

“New Zealand is a lot more interesting than it normally is for people offshore,” said Sharon Zollner, chief New Zealand economist at ANZ Bank in Auckland. “They see New Zealand as the canary in the coal mine.”

The RBNZ will be the first of its peers to lift its benchmark rate above a neutral level, which it deems to be 2%, applying the brakes on an economy that’s frothy with demand but also saddled with a record amount of household debt. While further rate hikes appear necessary to regain control of inflation, a possible recession next year could reduce the amount of tightening the bank ultimately delivers.

All economists in a Bloomberg survey expect the RBNZ to lift the Official Cash Rate to 2.5% from 2% on July 13. There’s no press conference with Governor Adrian Orr and no new forecasts, so the RBNZ’s decision text and record of meeting will be parsed for indications of where it’s headed next.

“There’s no doubt in our mind that people are watching New Zealand to give them an insight into what’s likely to happen in their respective jurisdictions,” said Stephen Toplis, head of research at Bank of New Zealand in Wellington. “We know that from the amount of queries we’re getting from offshore investors trying to gauge what’s happening here and what its implications are for the rest of the world.”

But the rapid tightening to date is already impacting New Zealand’s economy. Business confidence has slumped and house prices are falling, suffering their biggest quarterly drop since 2009 in the three months through June.

Most local economists don’t see the OCR rising above 3.5%, and some see policy being eased again from late 2023.

“After the RBNZ slammed the brakes, the first skid marks have appeared on New Zealand’s economic road,” said Frederic Neumann, co-head of Asian economics research at HSBC Holdings. “The contours of a shift in direction are becoming faintly visible in the distance. The signs are thus pointing towards a broader let-up in monetary tightening elsewhere.”

“The RBNZ might think twice about fully delivering on its rate-hike threats. The risk is that it could shift monetary policy back into accommodative territory much sooner than expected. Other central banks might take note.”

The Reserve Bank of Australia this week raised rates by half a point for a second month, and the Bank of Korea is increasingly expected to deliver a similar sized increase next week. The US Federal Reserve is forecast to move by at least another 50 basis points after a 75 basis point hike in June, and some officials at the European Central Bank are suggesting jumbo-sized rate hikes to lift off its tightening cycle.

New Zealand has had a reputation as a petri dish for central banking ever since it pioneered inflation targeting in the early 1990s, an approach that has since been adopted by many central banks around the world. Its open economy and exposure to China are additional reasons for offshore observers to look to it for clues on global trends.

The RBNZ was an early mover when it began withdrawing emergency stimulus last year. It ceased its quantitative easing bond purchases in July and began raising the OCR from 0.25% in October. Even then, some former policy makers criticized the bank for not acting sooner to head off inflation.

Initial success at eliminating Covid-19 from the community allowed the economy to rapidly bounce back from lockdown. The labor market tightened amid strong demand and an absence of migrant workers due to the closed border. Contrary to expectations of a slump, house prices soared as people rushed to take advantage of record-low borrowing costs.

“Like other major developed world central banks, the RBNZ is having to scramble to recalibrate its monetary policy stance,” said Paul Sheard, a former Research Fellow at Harvard Kennedy School. “How the RBNZ navigates that challenging terrain deserves to be closely watched. It is leading the central bank pack, and so its behavior might be a leading indicator of what other central banks will do.”