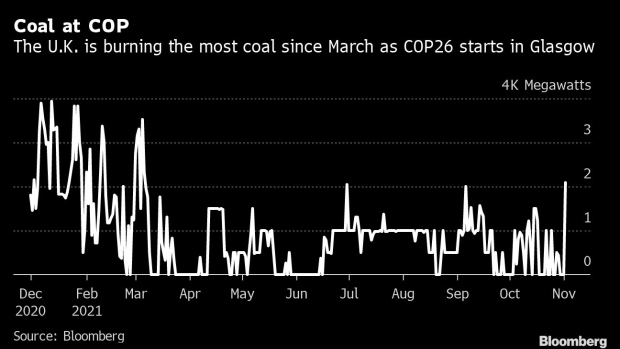 (Bloomberg) -- World leaders meeting in Scotland for climate talks this week are meant to be talking about how to consign coal to history, but the host nation itself is turning to the dirtiest fossil fuel for power.

The U.K. is burning the most coal since March, with network operator National Grid Plc asking Drax Group Plc’s and Electricite de France SA to fire up coal stations to meet rising demand on Tuesday evening. Wind speeds have slowed down sharply, leaving the U.K. reliant on burning coal and natural gas.

The shift comes at a tricky time for the U.K., which is pushing countries to commit to reducing carbon emissions at talks in Glasgow. COP26 President Alok Sharma has urged leaders to “consign coal to history,” but G-20 nations have already failed at reaching such deal, opting instead to pledge to end overseas coal financing.

Drax and EDF’s West Burton coal-fired stations are being paid about 4,000 pounds ($5,444) a megawatt-hour to supply electricity in the balancing market, grid data showed.