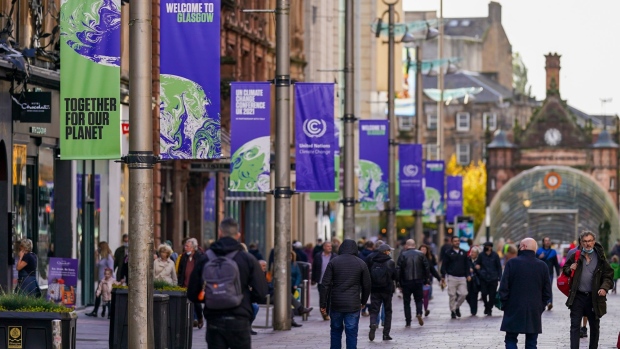 With seven days to go until global climate talks kick off in Glasgow, the noise of announcements and initiatives is growing louder. The chances of success remain decidedly mixed.

First, the good news. Negotiators are making progress on one of the key goals of talks — setting out rules for a global carbon market which, if well designed, will help reduce global emissions. A deal won’t be done until Glasgow and it could still all go wrong, but the signals from key parties including Brazil are positive. It would be a big win for COP26, and one that experts say should be the main prize of this round of talks.

But given the scale of the climate emergency facing the planet, the U.K. hosts set much bigger ambitions for the summit. It’s those goals that are slipping out of reach. COP President Alok Sharma wants to “consign coal to history,” and has been struggling to cajole major economies into an agreement. The Group of 20 leaders meet this week in a summit that will set the tone of COP, and so far talks on coal have been bitterly difficult, with signs of backsliding compared with earlier this year.

The energy crisis — which has forced China to double down on coal — isn’t helping. Neither are the difficulties U.S. President Joe Biden faces getting his green agenda approved at home.

Read our roadmap to COP talks: from the big goals to the backroom dealsOn Monday two key barometers of COP’s success are set to be released. As a raft of countries have submitted new climate pledges in the run-up to the summit, the United Nations will publish a report setting out just how effective they will be at limiting global warming. The aim of the Paris Agreement is to keep temperature rises well below 2 degrees Celsius and preferably to 1.5 degrees.

The most recent estimate showed we’re on track for 2.7 degrees of warming — an increase that will have catastrophic consequences. Some pledges, such as Saudi Arabia’s new net-zero commitment, probably won’t move the needle much.

A separate report will gauge another crucial aspect of talks: how the rich world is doing meeting promises it made more than a decade ago to raise funds for developing countries. At the heart of COP negotiations is the issue of fairness, given that economies which industrialized first and made a fortune at the expense of the planet are now demanding that developing nations do more to cut emissions.

Developed nations set a target of $100 billion of climate finance by 2020, a goal that still hasn’t been reached. The U.S. owes the most and is the furthest behind in contributions. While the sum is nowhere enough to support the energy transition needed to get the world to net-zero by 2050, the target has taken on strong symbolic meaning and failure will cast a shadow over negotiations.

Leaders will be forced to confront both assessments when they meet in Glasgow, Scotland on Nov. 1, with U.S. climate envoy John Kerry already playing down expectations.

With even U.K. Prime Minister Boris Johnson, usually an optimist, saying talks will be tough, the hosts are setting their sights on smaller deals done on the sidelines to help tackle specific problems. An agreement on methane is fast gathering support — it could help buy some time for policy makers to tackle tougher decarbonization goals. A deal on deforestation is in the works, though Brazil, a key player in any move to protect forests because of the importance of the Amazon, is still missing.

Where Brazil has shown willingness to act is on global carbon-market rules, covered in Article 6 of the Paris Agreement. Failure to resolve the issue is what sunk the Madrid climate talks in 2019. While a good deal enabling countries and companies to trade high-quality offsets will help finance important green projects, setting the bar too low could actually accelerate global warming by giving buyers a license to pollute without meaningfully compensating for those emissions.

“We should be cautiously optimistic of reaching agreement on Article 6 and completing the Paris Agreement rulebook,” says Simon Henry, director of carbon market development at the International Emissions Trading Association.

Global temperatures are already 1.1°C above pre-industrial levels, meaning the gap between what’s needed and what's being done is wider than ever. In the end, whether COP26 is judged a success or not will depend on how observers choose to measure it.