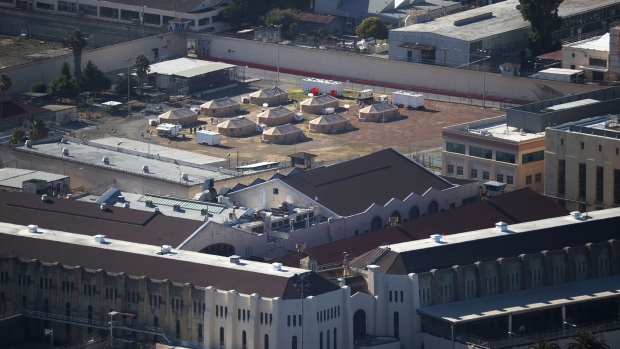 “Walk-thru” testing booths were installed in each of the country’s 54 prison compounds, masks were universally distributed, and prisoners had visitations curtailed. Use of common areas was also restricted. Nine months later, the Asian nation -- which has won plaudits globally for its effective and focused virus approach -- has reported only one other Covid-19 cluster in a jail system that’s home to some 55,000 detainees: an outbreak of 11 cases.

Contrast that with the U.S., where the virus spread to 2,200 people at California’s San Quentin State Prison over summer, killing 28. On New York’s Rikers Island, more than 1,400 corrections officers were infected during an outbreak last spring in which three inmates died.

After 90 of the 100 largest cluster outbreaks in the U.S. occurred in prisons and jails, doctors and researchers are now pushing for urgent changes in the criminal justice system -- including drawing on the successes of South Korea and elsewhere -- to arrest what is becoming a deadly, fresh pandemic wave.

“Correctional systems have become this hotbed for the transmission of the novel coronavirus,” said Emily Wang, an associate professor of medicine at Yale School of Medicine in New Haven, Connecticut, and director of the university’s Center for Health and Justice.

American prisons are often overcrowded and understaffed, Wang and Bruce Western, co-director of the Justice Lab at New York’s Columbia University, and another colleague wrote in an editorial last week in the Journal of the American Medical Association. Before the Covid-19 pandemic, U.S. jails and prisons held some 2.3 million people -- almost a quarter of the global incarcerated population.

Reducing the number of inmates, housing them in single cells, and testing those without symptoms for the SARS-CoV-2 virus can mitigate transmission in addition to the use of face masks and other standard public health measures, Wang and colleagues showed in a study released ahead of publication in June. Such strategies may reduce potential new cases by about 83% within 12 weeks, and avert 450 hospitalizations and 30 deaths among those who work and live in jails, they estimated.

As of Nov. 24, there have been 207,438 Covid-19 cases among people incarcerated in U.S. prisons, including 1,438 deaths, according to the Covid Prison Project, which tracks data and policy to monitor the pandemic in correctional facilities. Among staff, 44,598 infections have occurred with 75 deaths.

New cases have been increasing by more than 13,600 a week in November -- the most since the pandemic began, according to the Marshall Project, which has been tracking these numbers since March.

The death rate from Covid-19 is also three times higher among prisoners than in the general population, mapping closely the demographic pattern of severe disease and high rates of incarceration among Black, Latino, and indigenous communities.

The incidence of SARS-CoV-2 infection in prisons is more than five times higher. That reflects the inherent risk with an airborne virus in “congregate settings with poor ventilation,” said Stuart Kinner, head of the Justice Health Unit at the University of Melbourne. “Places like prisons are the riskiest places to be.”

Judges released about 100,000 prisoners during the year to try to limit the virus’s spread. Some had active infections that spilled outside correctional facilities, highlighting the potential for ex-prisoners to become “disastrous vectors for transmission in the broader community,” said Kinner, who also chairs the World Health Organization’s Health in Prison Programme Technical Expert Group.

“Prisons have been characterized as a disease pump,” he said. “You put people with those infections in, it spreads, and then you pump it out into the community.”

The consequence is costly for the whole of society, according to Kinner. “Containing Covid-19 in prison settings, you improve the health of some of our most vulnerable, you reduce a vector for transmission in poor communities, and you reduce the risk of overwhelming health services, which is obviously bad for everybody,” he said.

California to Release Some Inmates With Virus Ravaging Prisons

A botched transfer of inmates to San Quentin led to a massive outbreak at California’s oldest prison, where inmates share cells that have open bars and no doors, and ventilation is poor.

The 168-year-old facility installed a large air-conditioned tent structure to treat prisoners on the grounds but has come under fire for not heeding the early warnings of local public health officials and experts at University of California, San Francisco. A state appeals court faulted corrections officials last month for “deliberate indifference” to the health of inmates and ordered the state to release or transfer half of the San Quentin prisoners.

In South Korea, a far different scenario has played out. Prisons, under the guidance of health officials, impose significant restrictions on what is already a highly restrictive environment.

Inmates with Covid-19 symptoms are tested and quarantined if found to have the virus. Likewise, all new prisoners are quarantined for 14 days before being allowed into the general population and are tested if symptoms develop.

Masks must be worn at all times and group gatherings, including classes and counseling sessions, are restricted. In-person visitations have also been limited, with prison officials expanding the ability for inmates to conduct virtual meet-ups instead. In South Korea, glass partitions separate prisoners and their visitors, who are required to talk using microphones, a standard feature that likely also helped mitigate spread.

The Best and Worst Places to Be in the Coronavirus Era

The system isn’t failsafe. In the past week, a prison guard in the southwest city of Gwangju was infected by a new inmate who tested positive on Nov. 22. Additional screening Tuesday turned up nine more cases among inmates and prison staff.

But universal masking, abundant testing and the other measures that have helped South Korea respond rapidly to Covid-19 cases in its prisons aren’t standard in the U.S., Yale’s Wang said.