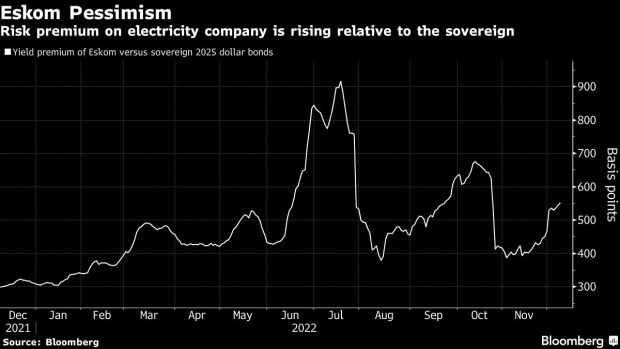 (Bloomberg) -- Eskom Holdings SOC Ltd.’s bonds are some of the worst performing developing-nation debt so far this month amid concern Cyril Ramaphosa will be removed as president of South Africa.

The embattled company’s dollar-denominated bonds maturing in 2025, 2027 and 2028 are all among December’s biggest laggards in the Bloomberg Emerging Markets Hard Currency Aggregate Index, which has 2,100 members.

In particular, yields on the state-run power utility’s 2025 notes have climbed on eight of the past nine days, surging 137 basis points. Those on similarly dated South African sovereign dollar bonds have also risen, but by a much more moderate 19 basis points.

The gap may point to idiosyncratic risk surrounding Eskom, according to Jones Gondo, a Johannesburg-based credit research analyst at Nedbank Ltd.

“Clients are concerned about policy continuity given that Eskom/Energy sector reform measures are underway with high execution risk and which have been propelled primarily from the President’s Office,” said Gondo.

Eskom has debt of about 400 billion rand ($23 billion) and is also struggling to supply enough electricity from its fleet of old and poorly maintained power plants to meet demand — blackouts were at the sixth level of an eight-grade scale on Thursday. South Africa in October said it may shift as much as two-thirds of that debt on to its own balance sheet, with strict conditions.

Ramaphosa has announced a series measures to try and address the country’s energy crisis. But he is now fighting calls for his impeachment over a scandal surrounding the theft of at least $580,000 in cash stashed in a sofa at his game farm.

Another factor weighing on Eskom bonds could be worries about large losses at the company, with delayed financial results now expected by Dec. 31.

“Together with the debt restructure coming,” this could see investors “trimming risk exposure to Eskom, all things considered,” Nedbank’s Gondo said.

Ramaphosa’s political future was cast in doubt on Nov. 30 when an advisory panel issued a scathing assessment of the president’s handling of the 2020 theft. After initially considering resigning, he is now contesting the report in court and has been given assurances by the governing African National Congress that its lawmakers will reject the findings when the matter is debated in parliament on Dec. 13.

The ANC’s internal integrity committee has conducted its own probe into Ramaphosa’s conduct and the party’s National Executive Committee is due to consider its conclusions at a Dec. 9 meeting. It’s unclear when the decision-making body will pronounce on them.

South Africa’s rand has pared its losses against the dollar since the advisory panel’s report to about 1%. The main stock index is also about 1% lower.

Public Enterprises Minister Pravin Gordhan on Thursday directed Eskom management to “work hard” to enable the country to exit Stage 6 loadshedding, according to a statement sent by text message using a local term for the rolling blackouts.

--With assistance from Mike Cohen and Paul Burkhardt.