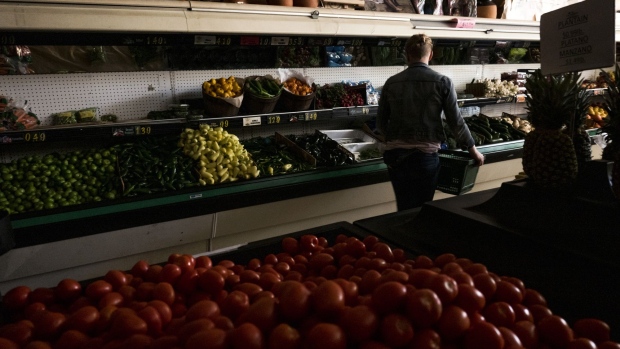 A customer shops for groceries at La Tapatia Market during a blackout in Napa, California. Photographer: David Paul Morris/Bloomberg , Bloomberg

(Bloomberg) -- More than 18 hours after PG&E Corp. plunged half a million customers into darkness across Northern California, some wondered when the strong winds were going to show up.

Wind speeds were still below 10 miles (16 kilometers) an hour in several areas that PG&E cut off overnight and just starting to pick up on Wednesday evening. The company, meanwhile, began a second round of shutoffs as part of a blackout that may eventually affect more than 2 million people -- a massive effort to keep strong gusts from knocking over power lines and igniting wildfires.

“Many of my constituents are disturbed that the power was shut down before the winds started to pick up,” state Senator Bill Dodd, a Napa Democrat, said.

PG&E says weather forecasts changed on it and that winds are gaining speed slower than expected. Meanwhile, the National Weather Service’s outlook remained unchanged with the situation becoming worse into Wednesday night.

“It actually gets worse this afternoon and this evening,” Marc Chenard, a senior branch forecaster at the U.S. Weather Prediction Center said Wednesday. “It is not one of those cases where it gets better overnight. In fact, in some parts of the state it will get worse.”

Craig Shoemaker, a meteorologist with the weather service in Sacramento, said California is “just at the beginning stages of the wind event.” The strongest gusts will continue into early Thursday, he said.

Don’t be fooled by the slow start. The wind and low humidity are forecast to make conditions ripe for any wildfires that spark to spread rapidly, just as the blazes that leveled Paradise, California, last year and devastated Napa Valley the year before did, Shoemaker said.

“Conditions will be similar to the pattern we had last year during the Camp Fire,” Shoemaker said.

To contact the reporter on this story: Brian K. Sullivan in Boston at bsullivan10@bloomberg.net

To contact the editors responsible for this story: Lynn Doan at ldoan6@bloomberg.net, Jasmine Ng