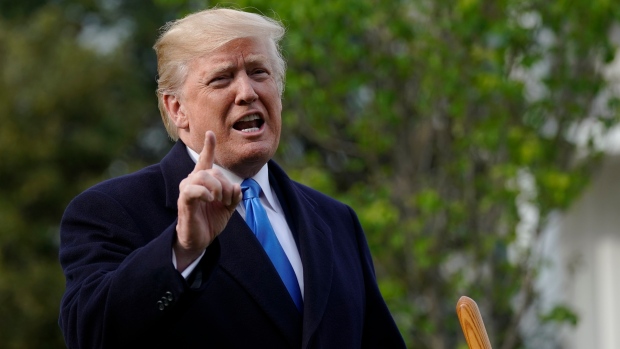 WASHINGTON - U.S. President Donald Trump said on Tuesday a new North American Free Trade Agreement could be agreed on quickly, as Canada hailed progress on forging new rules for the auto industry, the pivotal issue in talks to revamp the 24-year-old accord.

Ministers from the United States, Canada and Mexico responsible for NAFTA met in Washington to try to narrow differences on regional content rules for autos in the hope of tying up a deal in the coming days.

"NAFTA, as you know, is moving along. They (Mexico) have an election coming up very soon," Trump said at a Cabinet meeting briefly attended by reporters.

"But we're doing very nicely with NAFTA. I could make a deal really quickly, but I'm not sure that's in the best interests of the United States. But we'll see what happens," he said.

While details are still being negotiated, a new NAFTA is likely to push the region's automakers to source more parts from North America in order to create more jobs. Such an outcome could also raise costs for Detroit's main car manufacturers.

Canadian Foreign Minister Chrystia Freeland, leaving a 3-1/2-hour meeting with U.S. Trade Representative Robert Lighthizer, said there was progress on autos, which she described as "the heart" of NAFTA.

"Rules of origin for autos is fiendishly complex," Freeland told reporters. "We are very, very focused right now on digging into some of the details, being sure that there are no unintended consequences, being sure we get things right."

She added there were other major issues that needed to be addressed in the NAFTA talks expected to continue for several days in Washington, such as dispute-settlement mechanisms.

Freeland, Lighthizer and Mexico's Ildefonso Guajardo are pressing for a quick deal to avoid clashing with Mexico's July 1 presidential election.

Trump's negotiators initially demanded North American-built vehicles contain 85 per cent content made in NAFTA countries by value, up from 62.5 per cent now. But industry officials say that has been cut to about 75 per cent, with certain components coming from areas with higher wages.

Mexico, which at the outset of the Trump presidency said it would treat the NAFTA revamp as part of a general review of its relations with the United States, has pushed back in the talks by threatening to become less cooperative with Washington.

Two weeks ago, Mexico vowed to analyze all cooperation with the United States. The government on Tuesday circulated an official's letter to the Mexican Senate saying President Enrique Pena Nieto would soon consider the findings of the review.

Arriving for talks with Lighthizer, Guajardo said flexibility would be needed to reach a deal. He said Mexico would not accept any U.S. tariffs on aluminum or steel - another measure Trump has threatened to tie to NAFTA. A U.S. exemption to tariffs ends on by May 1.

Negotiators say a new NAFTA could be possible by early May.

"In the coming 10 days, we can really have a new agreement in principle," said Moises Kalach, head of the international negotiating arm of the CCE business lobby, which represents the Mexican private sector at the talks.

"As soon as there is political will from the American government to go for a final deal, I think we can close this," Kalach told Mexican radio. "We've had all our (negotiating) teams in Washington for two weeks and we will continue working all this week, the weekend and into next week."