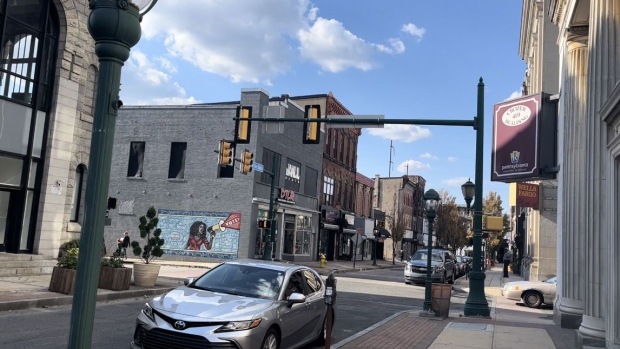 (Bloomberg) -- Decade after decade, Chester, Pennsylvania, has fallen deeper and deeper into a downward financial spiral.

As the city’s population dwindled to half its mid-century peak, shuttered factories near the banks of the Delaware River were replaced by a prison and one of the nation’s largest trash incinerators. A Major League Soccer stadium and casino did little to turn around the predominantly Black city just outside Philadelphia, where 30% of its 33,000 residents live below the poverty line. Debt piled up. The government struggled to balance the books.

Now, with its police pension set to run out of cash in months, a state-appointed receiver is considering a last resort that cities rarely take: filing for bankruptcy.

“The alarm that we’re sounding is very real,” said Vijay Kapoor, who does economic analysis for cities and is serving as the chief of staff for Chester’s receiver. “Chester is by far -- and I mean by far -- in the worst condition that any of us have ever seen and ever had to deal with.”

Few US cities are contending with financial strain as dire as Chester, which has been overseen by Pennsylvania’s program for distressed local governments for nearly three decades. But in another sense it’s far from alone: Like Chester, governments nationwide have failed to save enough to cover all the benefits promised to retirees, turning it into the latest cautionary tale about the reckoning when the bills finally come due.

In the years after the housing-market crash, three California cities, Detroit and Puerto Rico all went bankrupt, in large part because of retirement-fund debts. Such pensions are now being tested again, with the S&P 500 Index tumbling over 20% this year and bonds pummeled by the worst losses in decades.

“All of the headline general government bankruptcies this century have been largely due to unfunded pension liabilities,” said John Ceffalio, senior municipal credit analyst at CreditSights Inc. “It’s a common problem, particularly for poorer cities and cities that are suffering from declining populations.”

Chester’s population has been declining for more than a half century. It peaked at roughly 66,000 in 1950, before manufacturers like Ford Motor Co. shut down operations and White residents moved to the suburbs after the civil rights movement put an end to segregated schools and public housing. Retail stores closed, leaving vacant storefronts.

In 1995, Chester entered into Pennsylvania’s program that extends aid to financially distressed local governments. The city sought to spur development with a casino and a soccer stadium, though neither delivered an economic revival. Meanwhile, its income tax on residents and commuters served as another disincentive.

Faced with budget deficits, Chester shortchanged its pension funds, sinking deeper into the hole. The problem was magnified by miscalculations that allowed police officers to receive benefits based on their final year’s earnings instead of the last three, according to the receiver’s office.

It owes $53.9 million in pension contributions, enough to consume 88% of the city’s budget. That’s also far more than the approximately $16 million of bond debt the city has outstanding, excluding those related to the soccer stadium, according to figures from the receiver’s office.

Michael Doweary, who was appointed receiver of the city in 2020, is exploring options such as eliminating retiree health care, cutting the city’s costs for active employees’ medical benefits and reducing the city’s pension and debt-service costs.

But that’s virtually certain to draw resistance from employees, who would need to approve such changes. In February, Pennsylvania’s Department of Community and Economic Development gave Doweary the power to seek bankruptcy protection for Chester if such steps fall through.

“The answer is not to go to people and say we promised you if you work here for 25 years we’re going to give you post-retirement medical benefits, and then take it back,” said Les Neri, a former president of the Pennsylvania Fraternal Order of Police who is currently working with Chester’s officers. “At least current officers can make a decision to accept it and stay, or reject it and leave.”

Residents are divided on whether the city should go bankrupt, according to Zulene Mayfield, founder of Chester Residents Concerned for Quality Living, a local activist group. Some see it as a necessary step to finally steady its finances. But others worry it could saddle residents with higher costs if Chester winds up selling its water system to a private company in the process. Such a step could also at least temporarily jeopardize its ability to raise money in financial markets, or make it prohibitively expensive.

Mayfield also doubts that it would do anything to hasten economic development in the city. “They have plans to revitalize our waterfront, create condos and a marina-type atmosphere and a concert venue next to an incinerator -- and it makes no sense,” she said. “Would you buy a $200,000 condo next to an incinerator?”

But for Stefan Roots, who sits on the city council, there are few options other than going to court to pare Chester’s debts.

“Bankruptcy isn’t pretty, just like selling a water authority isn’t pretty, but is it necessary? Are there other options?” he asked. “If there are, please put them on the table, because I haven’t seen any.”