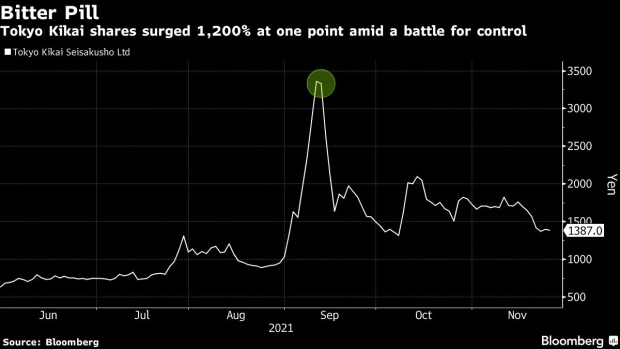 Pedestrians wearing protective masks in front of the Shinsei Bank Ltd. headquarters in Tokyo, Japan, on Thursday, Oct. 14, 2021. The Bank of Japan and Financial Services Agency are assessing if local financial institutions have any remaining Libor-linked contracts that will be difficult to shift to alternative interest rates before the benchmark expires. , Bloomberg

But while that was happening, another poison pill had more joy.

Tokyo Kikai Seisakusho Ltd., a small maker of newspaper printing presses, said Thursday that Asia Development Capital Co. had decided not to pursue control of the firm, ending a months-long takeover battle that led to a huge -- and fleeting -- spike in Tokyo Kikai’s shares.

Tokyo Kikai had used the tactic to block ADC, a Tokyo-listed investor headed by Malaysian Anselm Wong. It won shareholder support for the poison pill last month, but the vote excluded ADC, which had a 40% stake in the firm. ADC later said that, in its view, the proposal had been rejected. It sought a court injunction to block the poison pill.

The matter went all the way to the Supreme Court, which ruled last week that the poison pill defense could go ahead. The courts endorsed the decision not to count ADC’s vote, saying the move allowed other shareholders to express their opinion on the attempt to gain control.

While Shinsei’s decision to abandon its pill drew more attention, this lesser-followed case may have a more lasting impact.

The ruling may set an important precedent on the defense strategy at a time when Japan is seeing an increase in hostile takeover attempts. The debate on poison pills is only intensifying in the country, with influential proxy advisers surprisingly endorsing Shinsei’s plan, the government, a Shinsei shareholder, reportedly deciding not to support it, and the courts in this case backing Tokyo Kikai’s strategy.

Read next: The Poison Pill, Long Hated by Investors, Gets New Love in Japan