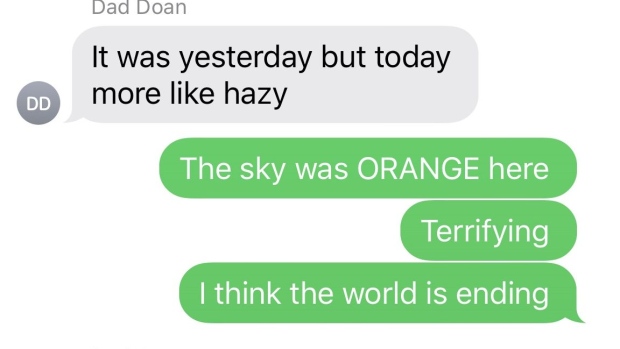 (Bloomberg) -- There are the obvious, most heart-wrenching consequences of the wildfires ripping through California: the 19 people who’ve died, the 3 million acres torched, the thousands of homes and businesses destroyed.

And then there’s the one quietly seeping through my windows: smoke so thick it swallows up the sun, casts a sickly orange pall over my house here in Oakland and has my daughter, Sophia, wondering why it’s dark out at 8:30 a.m.

Even a two-year-old knows this isn’t right.

We haven’t opened a window in three days, are blasting the one air purifier we were fortunate enough to have before California went up in flames, and the inside of our home still smells like an ashtray. I’m coughing, sneezing and have a splitting headache. I’m a little nervous to hear what a scientist has to say about this, but I call one anyway.

“The smoke levels right now are very high, and there are a lot of ways that fine particles and smoke affect our bodies. So yes, the smoke could be affecting a lot of systems,” said Maria Harris, an environmental epidemiologist who studies how air quality affects our health for the Environmental Defense Fund in San Francisco.

Harris lives here in the San Francisco area, too, with an 11-month-old and a 4-year-old. She warned in a blog post last week that wildfire smoke could worsen asthma and rates of heart attacks and that children, pregnant women and those with heart disease or respiratory conditions are particularly vulnerable. That was back when the fires had only burned 1.7 million acres.

In a phone call Thursday, she spoke about her experience parenting during this crisis. “I worry a lot about my own kids’ health. But it’s with these fires, thinking about my own kids’ future in a climate-disrupted world, that I get particularly visceral.”

Before this, I’m ashamed to admit, climate change wasn’t part of our everyday conversation. Now, seeing smoke leak through the windows of my daughter’s nursery, it’s something I can’t stop thinking about. It comes up every time we talk about the fires, how they’re only going to get worse and when we need to escape them for good— for Sophia’s sake. It comes up in check-ins with family and friends. “The sky was ORANGE here. Terrifying. I think the world is ending,” I texted my father, half-joking.

“It’s called climate change,” he wrote back, not joking.

Worldwide, wildfires spew more carbon dioxide into the air than America’s road, shipping and air transportation combined, making global warming worse in a vicious cycle that — at least in California — is starting to feel endless.

The fires are only the latest thing to beat down us disaster-weary Californians. First, it was Covid-19. Then two back-to-back heat waves that shattered records and triggered the first rotating blackouts since the 2001 energy crisis. Then freak lightning storms. And now this.

It’s too much, Harris and I agree. “It’s very sobering as a Californian to consider this becoming a regular part of our lives, and it is something that plays into my thinking about where it makes sense to have my family live,” she says. But how do you escape a global phenomenon? “There are a lot of different ways climate change is going to affect health around the world, and the wildfires are just the example here.”

California is far from the only place that has erupted in flames in recent months. In Oregon, fires have laid waste to some towns. Blazes devastated Australia earlier this year. And the Amazon was headed for another record burn. When you're surrounded by smoke and your county is texting you emergency alerts to stay indoors, all context melts away.

Harris has some advice for me: Keep the windows closed, don’t go outside, use HEPA filters and keep the portable air purifier running. I ask her if I need to worry about the long-term effects of the smoke on Sophia’s lungs. She can only say “more research is needed.”

The last time the smoke was even close to this bad — in 2018 — Harris remembers bringing her then-two-year-old child to Target to run through the aisles. “There seemed like no other good options,” she recalls now, “and she needed to run.”

We can’t take Sophia to a store in the middle of a pandemic. So every weekend, we scour air quality maps for a patch of green — that’s the color for “healthy’” air on the air quality readings — and then we race there to give Sophia a chance to breathe outside. In those moments, she jumps out of the car and runs like she’s never going to stop.