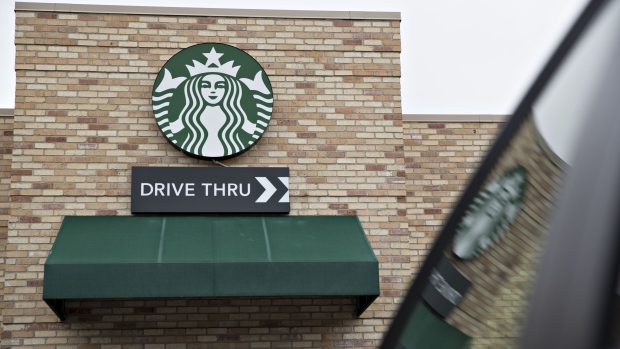 A logo hangs above a drive thru sign on the exterior of a Starbucks Corp. coffee shop in Peoria, Illinois, U.S., on Wednesday, Jan. 25, 2017. Starbucks Corp. is expected to release earnings figures on January 26. , Daniel Acker/Bloomberg

Starbucks Corp. has a plan to push more lattes and egg wraps out the door. Via the window.

The world’s largest coffee-shop chain is embracing the drive-thru lane. Eighty percent of all its new U.S. cafes will have them. While that may contradict the sit-down coffee culture Starbucks helped pioneer, in-the-car service can be a big moneymaker -- when done right.

Starbucks is still pokey in the drive-thru, and will have to speed things up if it wants to compete with the likes of Dunkin’ Brands Group Inc. and McDonald’s Corp. Getting it right could make or break the strategy that the Seattle-based company is counting on to jump start sales after revenue disappointed analysts in eight of the past nine quarters.

Starbucks has touted its coffeehouse culture as a place for people to meet up and stay for a bit. The chain built a loyal customer base by offering free Wi-Fi and plush chairs, and its executives often opine on the art and theater of turning beans into java. But the importance of cultivating a “third place” -- a location between home and work for customers -- has been on the decline as free internet connections have become more ubiquitous and co-working spaces have popped up.

The company’s image as a hangout for the masses took another hit earlier this month with the arrest of two black men at a Philadelphia Starbucks.

On a recent conference call that promoted the drive-thru strategy, Chief Financial Officer Scott Maw offered up the tale of two Starbucks in Fort Collins, Colorado, to make his point. One is in a shopping center; the other is a nearby drive-thru. Sales were two-thirds higher at the cafe serving customers while in their cars, Maw said.

At stores with car service, 70 per cent of sales come from the windows, according to estimates by Tom Cook, principal at restaurant consultant King-Casey who has previously worked advising Starbucks. Just a small percent of the chain’s customers actually linger inside, he said.

“Most of the people that were going in there were going in and out,” he said. “Things have changed -- everybody is more into this ease and convenience and speed.”

Starbucks began adding drive-thru stores years ago but is accelerating the push now as sales growth slows at its 14,000 U.S. cafes. And the company has made efforts to revamp experience for car-bound customers. In 2015, for example, it started putting baristas’ faces on video screens outside, and has installed 2,800 of the screens across the country.

On a recent Thursday at a drive-thru in Chicago, an order of coffee, tea and a peanut-butter cookie took nearly six minutes. During the wait, six cars piled up in the queue, showing how eager customers are, for now.

“Drive-thrus are a key to driving traffic -- the issue is you have to be able to get people through,” said Brian Yarbrough, an analyst at Edward Jones. At some point, “if they see there’s a huge line at the drive-thru, they’ll go down the street.”