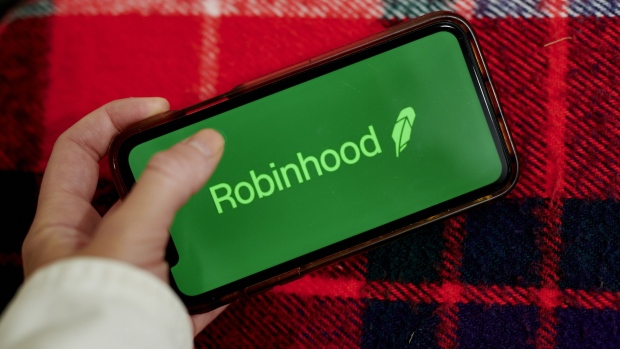 The logo for Robinhood is displayed on a smartphone in an arranged photograph taken in the Brooklyn borough of New York, U.S., on Monday, Oct. 12, 2020. , Gabby Jones/Bloomberg

TORONTO -- Some stock trading platforms say usership has spiked in 2020, as a whipsawing stock market and more time at home has a growing number of Canadians trying their hand at day trading.

"We've seen an incredible amount of growth on our platform this past year," says Kevin Gu, senior product manager at Wealthsimple Trade, an online trading platform.

"The pandemic has made active trading popular for a few reasons: people have more time on their hands since being at home, they are thinking about their finances more seriously, and they are excited about the opportunity to get into the market."

Financial experts, meanwhile, are urging would-be traders to educate themselves in the fundamentals of investing and warning them not to get caught up in "fear of missing out" on market highs.

The popularity of Wealthsimple Trade, launched in March 2019, has mirrored  those of similar stock-trading apps like Robinhood in the U.S. The $0 commission model that made Robinhood popular with first-time investors in the U.S. has found its way to Canada, where Wealthsimple Trade's average investor is aged 30 and trading Air Canada, Tesla, Shopify, Cineplex and Apple shares. Gu calls these users "casual traders."

"We've seen a lot of activity from new investors who use the platform to invest in what they believe in," Gu says.

Wealthsimple Trade says new users increased by 80 per cent to 380,000 between July and December. Other platforms are seeing the surge in trading, too. TradingView says it saw an unprecedented 131 per cent jump in new users in March as COVID-19 lockdowns hit, and a 51.5 per cent increase in activity from existing users. Signups dipped in September but were back on the rise again by October.

"On Instagram, you see it a lot. There are influencers, some of whom are knowledgeable about financial things. Some are not," says Bissett.

Investment manager Hilliard MacBeth likens today's markets to TV ads that ran leading up to the dot-com bubble in 1999 and 2000, where day traders showed off their yachts.

"The reality is, really none of those people actually were able to hang on to it. Obviously, some people made some huge gains during the bubble. But inevitably, they give it all back and more when the bubble burst," says MacBeth, author of "Investment Traps And How To Avoid Them: and "When the Bubble Bursts: Surviving the Canadian Real Estate Crash."

Bissett says that first-time investors sometimes jump right to investing without doing the basics. She advises people to consider the timeline they're saving for -- going back to school or a down payment may be near-term goals that can be financed through a special RRSP lifelong learning or homebuying plan, while other goals like retirement may be farther out and require more of an invest-and-hold approach.

"If you need that money in the future for other purposes, then you want to go to something where there's a smaller possible range of returns, understanding anything can happen at any time with stocks," Bissett says.

Bissett also says investors should pick stocks with a range of historical returns that are comfortable on both the high and low end. When researching which stocks match someone's risk tolerance, she advises investors to use reputable sources and look at how reliably the company is turning a profit.

"Risk tolerance is all about thinking about what would happen if you lost all of your initial investment," Bissett says.

With initial public offerings like DoorDash nearly doubling in price, timing the market can seem like a quixotic strategy that's making all your friends richer, he says, particularly amid the ongoing economic downturn. This year alone, the TSX Composite Index hit a high of 17,970.51 in February, a low of 11,172.73 in March, and now sits back above 17,400.

But, he warns, "it's not easy at all, to beat other investors or to beat the market."

MacBeth also says that while roboadvisors and free apps have become the norm, they are not without their tradeoffs, and advised looking into how the app treats its user data.

The screening effect of talking to advisers can be pretty helpful in the instance where somebody is about to do something really, really crazy and risky. Most advisers, they want to keep their clients and they want them to survive, because that's the way to grow your business," MacBeth says.

Gu says Wealthsimple has encouraged users to actively trade less than one per cent of their overall savings, adding that "the smartest way to grow your money long-term is to have a diversified, low-cost portfolio that tracks the market, contribute regularly, and stay the course."