Canada’s job market has been firing on all cylinders but it’s been especially strong for men.

More than 193,000 males took new jobs in Canada last year, almost double the number of females, pushing the unemployment rate for men below six per cent for the first time since records began in 1976. The figures mark a divergence from the U.S., where women eclipsed men as the majority of jobholders.

The fastest pace of immigration in the Group of Seven is a big factor behind the trend in Canada, spurring a housing boom that’s pushing up demand for everything from plumbers to electricians. A fast-track visa process is also pulling in workers to the male-dominated field of technology, while male immigrants are more likely than women to work outside the home. 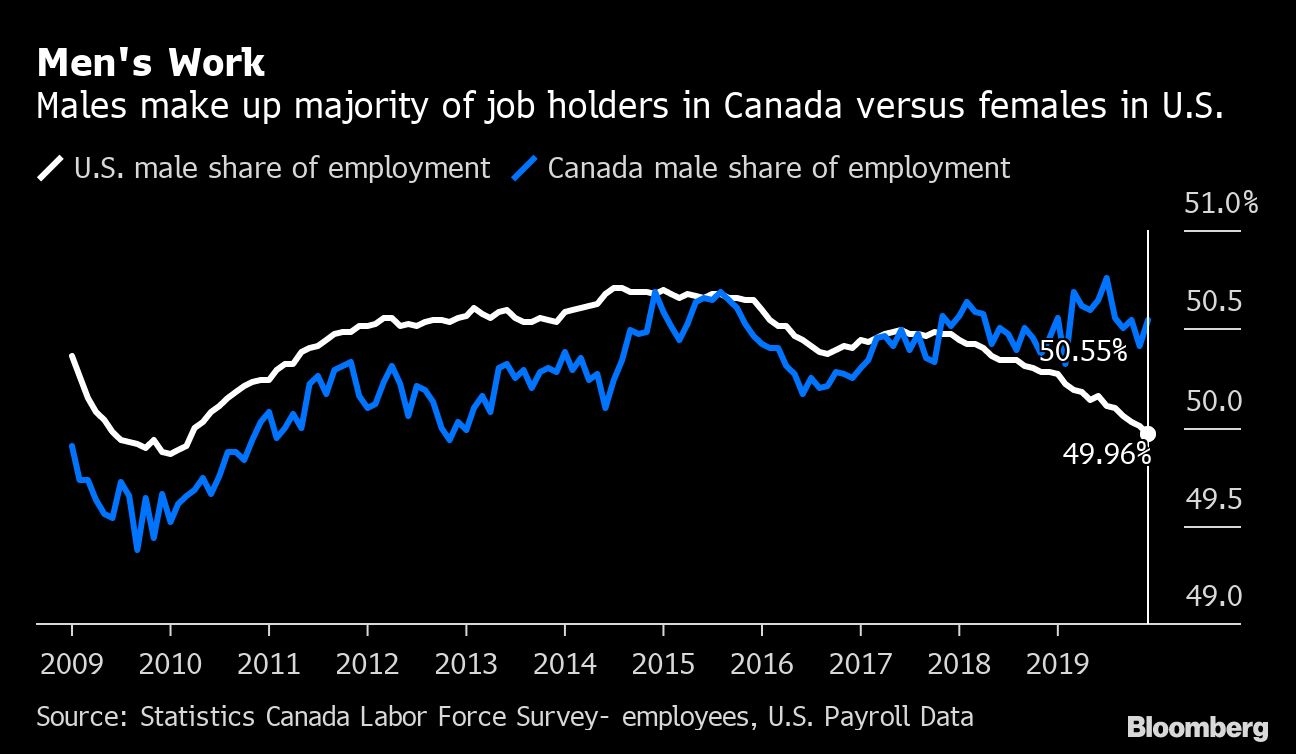 To be sure, the headline figures mask stark regional disparities that underscore the difficulties Prime Minister Justin Trudeau is facing. Much of the job creation has been in central Canada while parts of the West struggle with a slump in the energy sector that has gutted thousands of jobs. Many of those may not come back as the world shifts away from fossil fuels and Trudeau’s Liberals push to reduce Canada’s carbon emissions, creating simmering resentment in Alberta.

Ontario, anchored by bustling Toronto, added 133,200 jobs for men in 2019 — sending the unemployment rate to 5.3 per cent for males versus 5.4 per cent for females. In recent years, the province has reinvented itself from a manufacturing hub to a services juggernaut, reclaiming its spot from Alberta as the main source of male employment. That trend accelerated last year when nearly 70 per cent of all new male employment was concentrated in Ontario.

Kris O’Neill, a 24-year-old crane operator, is one worker benefiting from Ontario’s resurgence.

“There’s a lot of opportunity out there, especially for young people who don’t know what they’re doing in life,” said O’Neill, who often works 10 to 18 hours a day helping to build one of Toronto’s highest office towers at CIBC Square, the future headquarters of Canadian Imperial Bank of Commerce. “I don’t think since this job started I’ve worked less than a 60-hour week.” 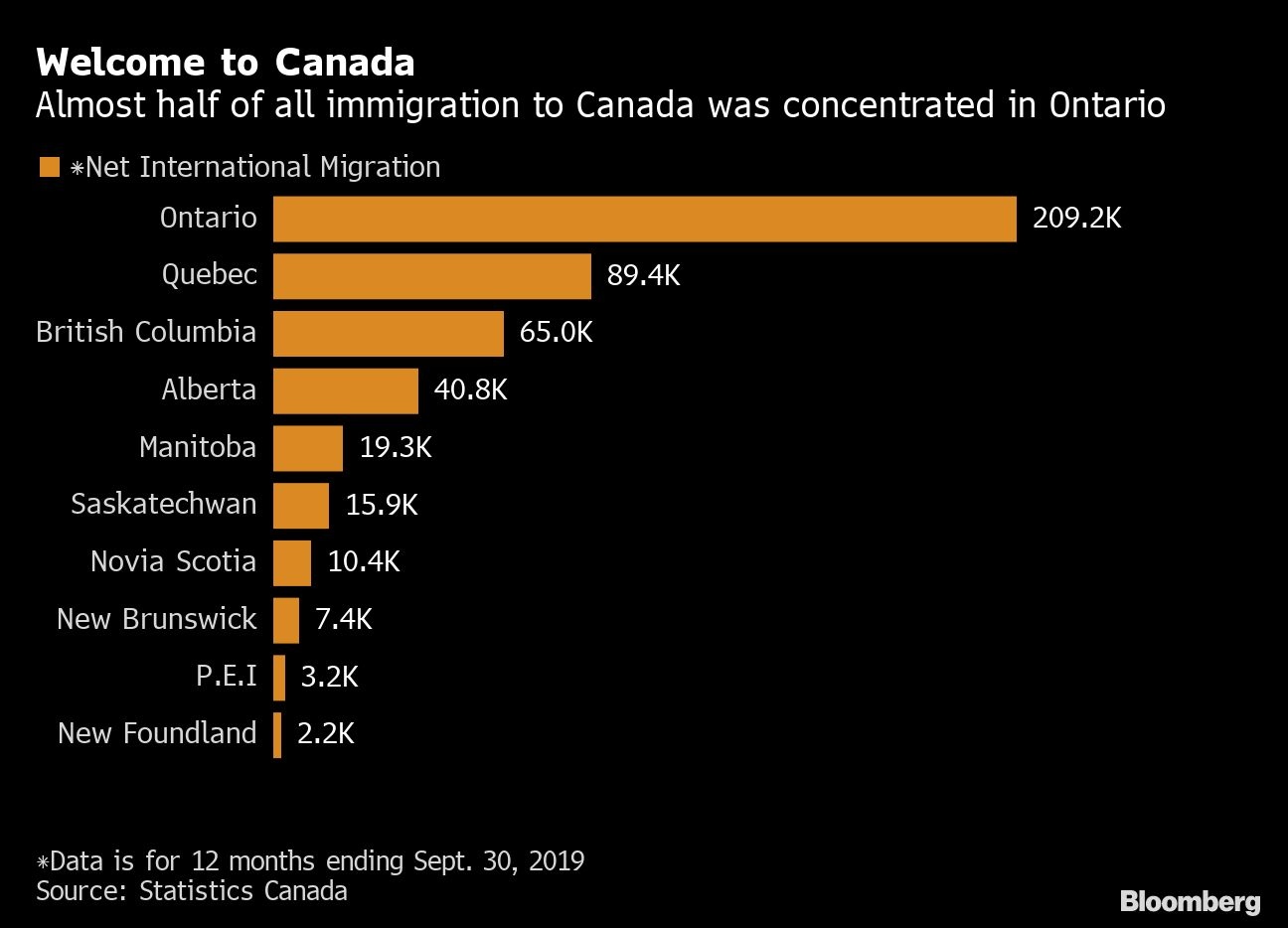 In the U.S., men have been held back by mismatched skills, a drift to early retirement and the opioid crisis. U.S. President Donald Trump has also clamped down on visas for the high-tech sector, a source of jobs growth in Canada.

Male immigrants are more likely to participate in the workforce than women, who often face additional barriers, according to Parisa Mahboubi, a senior policy analyst at C.D. Howe Institute in Toronto.

The broad-ranging category of “professional, scientific and technical services,” which includes lawyers, public-relations professionals and the burgeoning IT sector, was the largest source of male employment growth in Ontario.

Toronto wasn’t the only Ontario city churning out tech jobs in 2019. Waterloo is home to a university that’s at the forefront of machine learning and autonomous technology as well as the Perimeter Institute for theoretical physics. And Ottawa is the headquarters of tech darling Shopify Inc., which boasts more than 1,000 employees across its two offices in the capital city.

Patrick Grieve, a managing director at hireVouch, a Toronto-based tech recruitment agency, said employers can’t find workers fast enough and are prepared to pay up. Salaries range from about C$120,000 ($91,000) for those with three to five years experience to about C$160,000 for more senior workers. Those being wooed by large U.S. companies can earn even more.

“Almost every candidate that we work with gets multiple offers,” he said. “It’s probably the hardest time if you’re an employer, but if you’re looking for an opportunity or looking for a different opportunity then this is certainly the best time.”

Royce Mendes, an economist at Canadian Imperial Bank of Commerce, has doubts the immigration surge will translate into rapid employment in 2020.

“A growing population actually increases the likelihood that soft demand for labor leads to a rising unemployment rate as there are potentially more working-age citizens that can’t find work,” Mendes wrote in a note.

In the meantime, O’Neill, the crane operator, doesn’t mind putting in all those extra hours on the job even if it means less time with his girlfriend.

“She’s very accepting and understanding, and obviously the paychecks at the end of the week help,” he said. “It’s good for me, too. I’m young.”

--With assistance from Erik Hertzberg and Theophilos Argitis.