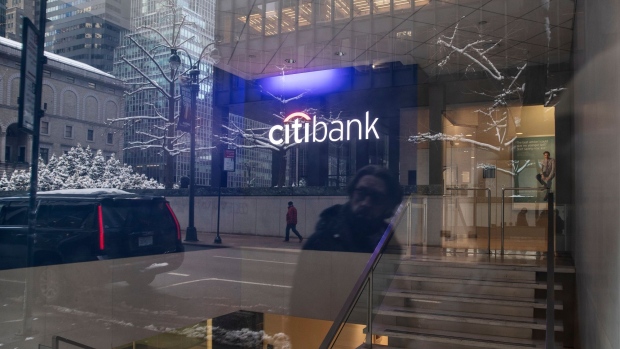 (Bloomberg) -- Top U.S. bank executives are taking turns tamping down expectations for Wall Street profits this year, while giving shareholders some reason to stick around: Lending is set to grow.

Trading has cooled after a surge set off by the pandemic, and costs to reward rainmakers are climbing, leaders of JPMorgan Chase & Co. and Citigroup Inc. told analysts and investors on Friday. But the economy is strong, and rising interest rates will help burnish returns on loans, they and their counterparts atop Wells Fargo & Co. said.

“We have huge firepower to grow, to expand, to make loans, to extend duration,” JPMorgan Chief Executive Officer Jamie Dimon said in a conference call. He remained optimistic on U.S. economic growth, he said.

U.S. banks are under increasing pressure to show how they will grow going forward after investors made clear they were displeased with fourth-quarter results. Both Citigroup and JPMorgan fell, with JPMorgan tumbling as much as 6.4%, its steepest decline since June 2020. By midday, only Wells Fargo had clawed back initial losses to trade up about 2.6%.

“On the corporate side, we’ve not yet seen growth play out,” Citigroup’s Mason said. “And again, our clients have very, very strong balance sheets. There’s a lot of liquidity in the market.” Wells Fargo’s CFO Mike Santomassimo said higher card spending had not translated into loan growth.

Topping it off were expenses, as inflation drove up wages and banks faced other costs. They climbed 11% at JPMorgan which also forecast an 8.6% increase to $77 billion for this year. Citing inflation and investments, the bank’s CFO Jeremy Barnum said it was in for a “couple of years of sub-target returns.”

But despite the dreary results, executives remained optimistic that borrowing will bounce bank in 2022. The bread-and-butter part of their business -- lending -- stands to benefit from Federal Reserve interest rate hikes and the run-off of stimulus measures.

Wells Fargo said it expected net interest income, a key metric for the lender that tracks what it makes in loans minus what it pays to depositors, could increase about 8% in 2022. JPMorgan, the biggest U.S. bank, also said it expects NII excluding the markets business to be $50 billion for the full year, higher than in 2021.

Barnum said the bank has begun seeing a pickup in loan growth, after reporting 1% drops in both consumer and business loans from a year earlier. The consumer is in “good shape,” Dimon said.

“In spite of omicron, in spite of supply chains, 2021 was one of the best growth years ever,” he said.