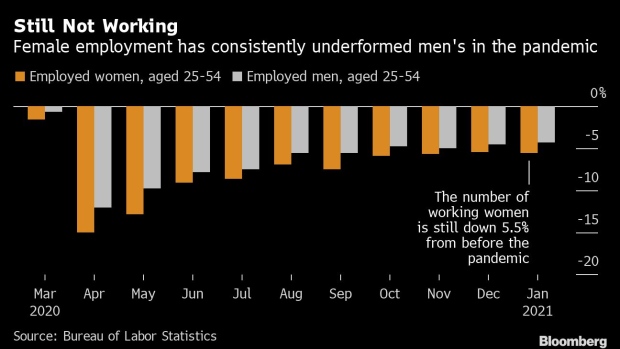 A morning commuter walks through Tokyo station in Tokyo, Japan, on Jan. 4, 2019. Japanese stocks dropped on the first trading day of 2019, as Apple Inc.’s outlook cut and weak economic data from the U.S. and China intensified global growth concerns. , Bloomberg

(Bloomberg) -- As women have left the U.S. workforce in droves, in what some economists have deemed the first female recession, calls for structural changes to support them are growing louder.

Since the pandemic took hold, more than 2 million women have dropped out of the workforce. The crisis has exposed the burdens on working women but also provided an opportunity for substantive change, according to Reshma Saujani, founder and chief executive officer of Girls Who Code.

“The infrastructure of childcare is broken,” Saujani said Tuesday at the Aspen Institute’s RE$ET Conference with Bloomberg Economics. “Nobody can afford it and it’s not seen as something that we simply need in our society -- and that has to change.”

Saujani has spearheaded an effort calling on the Biden administration to enact a “Marshall Plan for Moms.” It presses for short-term monthly payments depending on needs and resources and advocates for policies like paid family leave, affordable childcare and pay equity.

A group of 50 high-profile women publicly signed on to the effort in January and on Tuesday the founder of Craigslist, Craig Newmark, announced a $500,000 donation to Girls Who Code in support of the plan.

“Mothers are facing the brunt of this pandemic, and it is on all of us to step up and ensure that we are providing them with the relief and compensation they deserve,” said Newmark. “That is why I’m making an investment in the Marshall Plan Moms so that we can continue to raise awareness and call on our elected leaders to take action now.”

Women were hard hit in this economic recession because it was the first led by the service sector, Betsey Stevenson, an economics professor at the University of Michigan, said at the Aspen event. That compares with the 2008 financial crisis when many of the jobs lost were in goods-producing industries, which are more male dominated, she said.

“If we think about things like education, and health services, 78% of those jobs are held by women,” said Stevenson. “And that got hit really hard in this pandemic.”

More than one-third of parents, mostly women, have yet to return to jobs they lost largely because there’s no one to look after their kids, according to a December report by U.S. Chamber of Commerce Foundation.

President Joe Biden’s $1.9 trillion stimulus package includes billions of dollars to help reopen schools and provide additional paid leave to struggling parents, but it may come too late for many women who have already left jobs.

At a Senate hearing earlier Tuesday, Federal Reserve Chair Jerome Powell was asked multiple times about women who have dropped out of the labor market to take care of children.

“That burden has fallen significantly more on women than on men,” Powell said. “Hopefully that will be temporary to the extent people want to return.”

But he also noted the challenges ahead. “It may be difficult to get back to where you were,” Powell said.