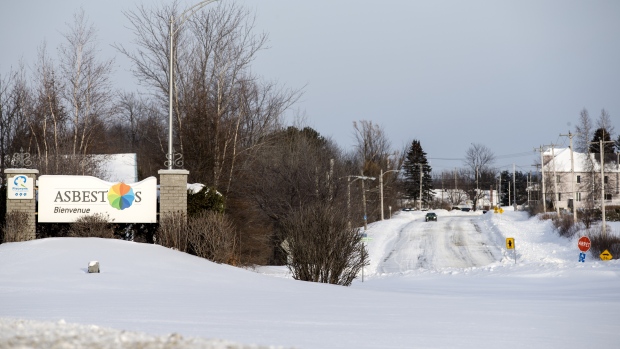 A welcome sign is displayed in Asbestos, Quebec, Canada, on Friday, Feb. 9, 2018. Quebec once produced half of the world's asbestos and offered the highest-paying mining jobs in Canada before concern about cancer led to the fire-resistant fiber being banned in more than 50 countries, with the mine finally shutting down in 2012. But now it turns out that the future of Asbestos may actually be in the millions of tons of discarded residue that piled up over more than a century of mining for the mineral. , Christinne Muschi/Bloomberg

The town of Asbestos, Quebec is moving on from its moniker with the deadly reputation.

The community of about 6,800 people in southeastern Quebec is changing its name, dropping the mineral that supported the local economy for decades but is now associated with cancer. In a Facebook post Wednesday, the city council said it made the decision with the town’s future in mind and asked citizens to contribute ideas ahead of an official change in 2020.

“The word ‘asbestos’ unfortunately doesn’t have a good connotation, especially for Anglophones, and it’s hindering the city’s plans to develop external economic relations,” the city said in the post.

That’s putting it mildly. Several businesses over the years have balked at investing in Asbestos because of its name, including a manufacturer that refused as recently as September, Mayor Hugues Grimard said in a phone interview. During a business development trip to Ohio, investors wouldn’t even take the envoy’s business card, he said.

“Even in Montreal there are perception issues,” Grimard said.

The decision follows a failed attempt at a new name in 2006, pre-dating the 2012 shutdown of the mine, a crater more than a mile wide that’s the town’s most prominent landmark. While asbestos is banned in more than 60 countries, many in the town are still attached to the fire-resistant fiber used in home construction, which for decades was the source of well-paying jobs.

Read more on the Asbestos mine

Asbestos is now more mindful of the need to diversify its economy. Despite some investors’ reluctance, the city has attracted business to it industrial park, including a duck slaughterhouse and a semi-trailer manufacturer that took advantage of a C$50 million ($37.7 million) fund from the provincial government. A company is also developing magnesium production out of the discarded residue from asbestos mining.

Now the city council, which initially tried to merge with a nearby town until talks collapsed over taxation, wants citizens to be involved in the search for a new name.

“We’re going to have to explain the situation to the entire population,” Grimard said. “Then they will participate in the creation of a new identity.”

The post attracted hundreds of comments on Facebook, from locals and outsiders alike. While a few people were supportive, several were offended and critical. Others started throwing names and jokes around. Among them: “Saint Asbestos,” “The Hole,” and “Mine Craft.”