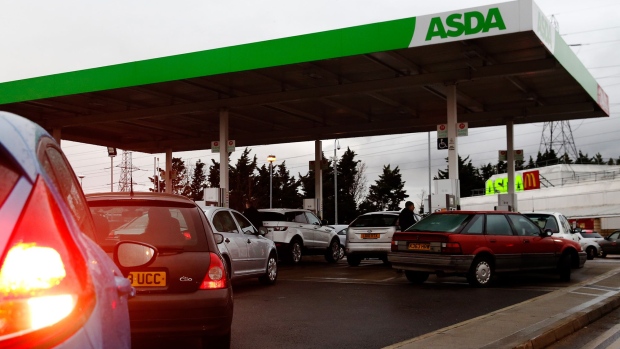 Barclays Plc is leading a round of talks with investors to raise the equivalent of 500 million pounds ($691 million) of debt for U.K. supermarket chain Asda after a deal to purchase its forecourt gas pumps business fell through.

The bank is seeking to raise senior secured debt for Asda which could be a mix of bonds and loans, according to people familiar with the matter. The proceeds, along with 262 million pounds on Asda’s balance sheet, will go to repay a 750 million-pound bridge loan.

The fundraising comes after gas station operator EG Group and Asda, both owned by Mohsin and Zuber Issa, scrapped the planned 750-million-pound transaction after reviewing commercial information, the companies said earlier this week. The Issa brothers, along with TDR Capital, struck a 6.8 billion-pound deal a year ago to buy Asda from Walmart Inc. Their EG Group later separately agreed to buy Asda’s gas filling stations, car washes and ancillary land.

Spokespeople for Asda, EG Group and TDR declined to comment. A spokesperson for Barclays didn’t immediately respond to a request for comment.

On Monday, Moody’s downgraded the holding company formed to carry out the Asda acquisition, Bellis Finco plc, to Ba3 from Ba2, while assigning a Ba3 rating to the planned new deal to raise debt. Fitch meanwhile affirmed the rating and gave the new debt tranche a rating of BB+.

Around 6.4 billion pounds of financing is expected to launch to the public market to finance the deal.