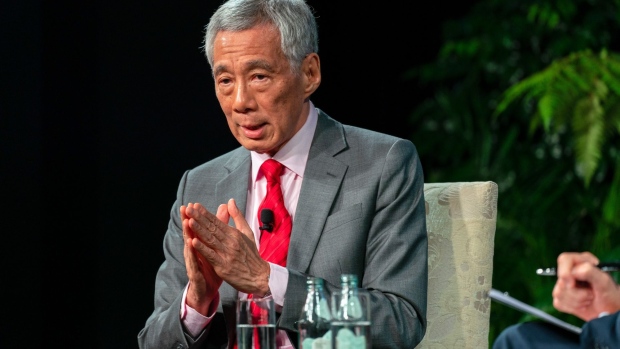 (Bloomberg) -- Singapore Prime Minister Lee Hsien Loong said that Asean should continue to exclude Myanmar’s junta leaders from meetings until headway is made on an agreement which includes a cessation of violence in the country.

The Association of Southeast Asian Nations should keep to its decision made at the bloc’s summit last year of inviting only a non-political representative from Myanmar to meetings until “significant progress” is made in implementing a five-point consensus between the grouping and Naypyidaw, Lee said during a call with Cambodian Prime Minister Hun Sen Friday.

With Cambodia now the rotating chair of Asean, Hun Sen last week became the first foreign leader to visit Myanmar since the junta seized power in a coup nearly a year ago. His two-day trip drew widespread criticism that it would legitimize the rule of the regime, which has been engaged in intensifying battles with armed groups.

“Any discussion to revise the Asean leaders’ decision had to be based on new facts,” according to the statement from Singapore’s Ministry of Foreign Affairs on Saturday. “Prime Minister Lee noted that just days after Prime Minister Hun Sen’s visit, there had been further attacks by the Tatmadaw against its political opponents, and additional prison sentences imposed on State Counsellor Aung San Suu Kyi.”

While Hun Sen made some proposals on how to coordinate a cease-fire in Myanmar and deliver humanitarian assistance to its people, Lee said he was unsure what role Asean could play since they didn’t have access to all parties. Still, Singapore has “no in-principle objections” to such a mechanism if it could foster an end to violence, Lee said.

Hun Sen’s trip was commended this week by Japanese Foreign Minister Yoshimasa Hayashi, who welcomed Cambodia’s positive efforts to resolve the situation and said it resulted in progress toward a cease-fire. But Malaysian Foreign Minister Saifuddin Abdullah was critical of the meeting with the junta, adding that the Cambodian prime minister didn’t consult with Asean on the matter.