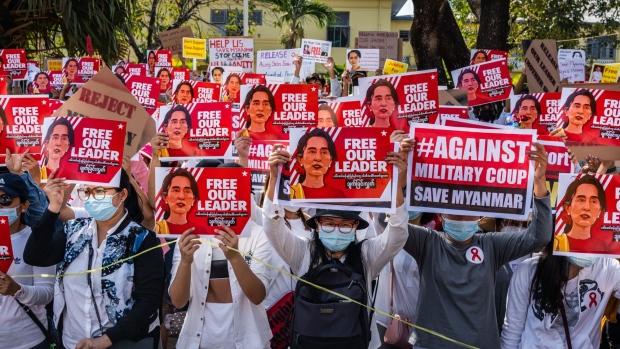 YANGON, MYANMAR - FEBRUARY 12: Doctors join a protest against the military coup in front of the Chinese Embassy on February 12, 2021 in Yangon, Myanmar. Myanmar declared martial law in parts of the country, including its two largest cities, as massive protests continued to draw people to the streets a week after the country's military junta staged a coup against the elected National League For Democracy (NLD) government and detained de-facto leader Aung San Suu Kyi. Police fired rubber bullets, tear gas, and water cannon to disperse protesters at demonstrations across the country, earlier in the week, and the military junta's leader urged civil servants who had joined the civil disobedience movement to return to work. The U.S. government imposed sanctions and froze the U.S. assets of several of the coup's leaders and their families. (Photo by Hkun Lat/Getty Images) Photographer: Getty Images/Getty Images AsiaPac , Photographer: Getty Images/Getty Images AsiaPac

(Bloomberg) -- Southeast Asian countries agreed to exclude Myanmar’s junta leader from a key summit later this month, a rare and decisive move by the 10-member bloc to hold the regime accountable for a violent crackdown on its political opponents.

The Association of Southeast Asian Nations extensively discussed Myanmar’s representation in the Oct. 26-28 summit and didn’t reach a consensus to allow for a political representative from the country to attend, the bloc said in a statement on Saturday.

That’s because a group of ousted lawmakers aligned to Myanmar’s detained civilian leader Aung San Suu Kyi had reached out to some Asean member states, asking to be invited to the summit which will be held in Brunei.

“Therefore, in the view of competing claims” to attend the summit and to “allow Myanmar the space to restore its internal affairs,” a decision was made to invite a non-political representative, Asean said after a meeting of foreign ministers was held on Friday to discuss the country.

The bloc noted reservations from the Myanmar representative on the decision.