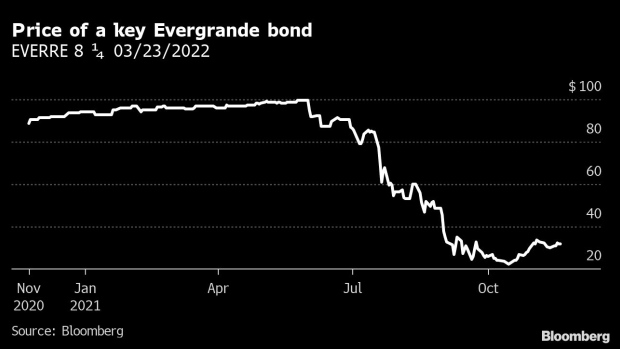 (Bloomberg) -- The news was bad and about to get worse. Property developer China Evergrande Group appeared to be buckling under its massive debt load and investors were headed for the door. For Ashmore Group Plc, though, it looked like a buying opportunity.

From July to September, as headlines battered Evergrande’s stock and bond prices, London-listed Ashmore bought almost another $100 million of bonds issued by the developer or its subsidiaries. The trades brought its holdings of the debt to more than $500 million at the end of September, according to data compiled by Bloomberg. The total level held by the asset manager may be even higher since 75% of Ashmore’s assets are held in segregated mandates, for which data may not be available.

In a story full of superlatives, the emerging markets-focused asset manager holds at least one of its own. Before the selloff, Ashmore was already the biggest holder of the developer’s dollar-denominated bonds. Since other big holders, including Prudential Plc and the Royal Bank of Canada, cut their exposure when it was buying, that title looks to be firmly held.

A spokesperson for the company, which manages $91.3 billion of assets, declined to comment and would not disclose whether the firm had increased or decreased its holdings since the end of September. Founder and chief executive officer Mark Coombs did not respond to emails seeking comment.

A Morningstar report from October said Ashmore was still ‘generally positive’ on the Chinese real estate sector at the end of September.

Evergrande’s liabilities swelled to more than $300 billion as of June. The developer has so far pulled back from the brink by meeting delayed coupons at the 11th hour before grace periods ended.

Evergrande bonds started slumping at the end of May but the decline gained steam in July and bonds due in 2025 lost more than 60% of their value in the third quarter. The filing didn’t indicate when in the quarter Ashmore funds made their purchases. In comparison with the end of September, prices are currently little changed.

A default is still a real risk, with S&P analysts as recently as Nov. 18 calling it “highly likely” because of upcoming bond payments.

“We believe the government wants to unwind Evergrande in a controlled fashion, or let an orderly debt restructuring take place,” the analysts including Matthew Chow wrote in a report. “At some point, however, Evergrande’s massive debt will catch up with it. The firm has lost the capacity to sell new homes, which means its main business model is effectively defunct. This makes full repayment of its debts unlikely.”

The asset manager reported its assets under management had shrunk by around $3 billion in the three months through September, with net outflows accounting for $1 billion and portfolio losses for $2.1 billion. The firm’s shares have dropped almost 30% this year.