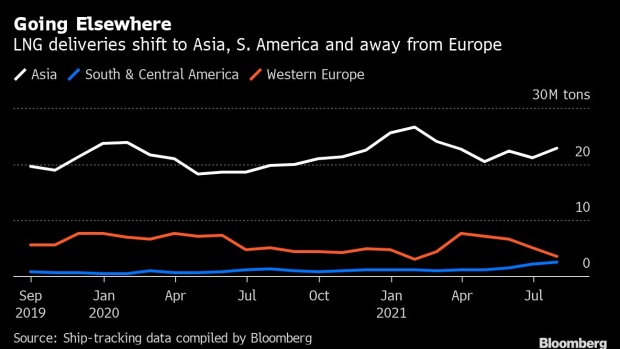 Asian imports rose 16% in July from a year earlier and shipments to South and Central America nearly doubled to a record high, ship-tracking data compiled by Bloomberg show. European purchases fell to the least since January. Global LNG exports -- mainly from Australia, Qatar and the U.S. -- jumped 12%.

LNG demand in Asia was mainly driven by hot weather in China, Japan and South Korea that increased air conditioning use, boosting consumption of the electricity feedstock. A drought in Brazil, meanwhile, slashed hydropower output, forcing utilities there to ramp up gas-fired power generation. U.S. exports of the super-chilled fuel more than tripled from last year as end-users maximized contract volumes.

European utilities have struggled to replenish inventories -- currently at the lowest level for this time of year in over a decade -- due in part to a drop in LNG flows to the region. And while that has sent the European spot benchmark soaring to a record, Asian importers continue to increase bids to secure supply.

To avoid a power crunch, Pakistan agreed to buy LNG at the highest levels since it started importing the fuel in 2015. Even price sensitive end-users in India and China recently snatched up summer shipments at the highest seasonal levels in eight years.