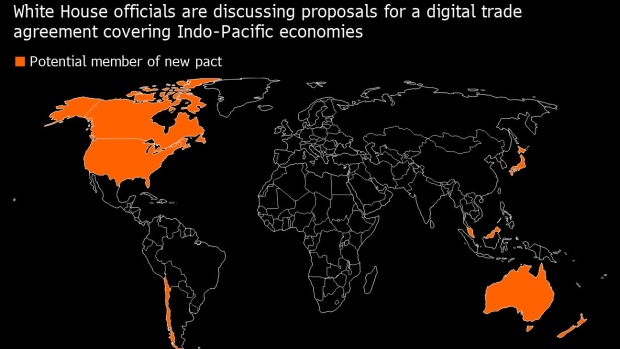 Details of the potential digital accord are still being drafted, but the pact could include countries such as Australia, Canada, Chile, Japan, Malaysia, New Zealand and Singapore, Bloomberg News reported July 13.

Asked by Bloomberg Television’s Annmarie Hordern on Thursday if the digital deal would be a precursor to the U.S. joining the Comprehensive and Progressive Agreement for Trans-Pacific Partnership, Tehan said “there are a lot of countries in the region that would hope that that would be the case, but our view is let’s take one step at a time.”

The digital pact would be an early effort by the Biden administration to present an economic plan for the region after Trump’s decision to withdraw from negotiations for the trade deal in 2017. Tehan said he’d had “very good meetings” with U.S. lawmakers about the digital pact.

“Let’s take one step at a time and create the bipartisanship for a digital trade agreement in the Indo-Pacific region and if we can take that first step, hopefully we could look at a second step, which would be TPP membership by the United States,” Tehan said.

The 11 countries in the CPTPP say it remains open to all applicants. China is now pushing ahead with behind-the-scenes talks to join the pact, which at one time was envisioned to cement U.S. economic power and trade ties in the region.

Tehan is seeking to drum up support for Australia in its increasingly fractious relationship with China. During his U.S. visit this week, he met with U.S. Trade Representative Katherine Tai, who said Washington “stands with Australia” on trade challenges with Beijing.

Relations have frayed since 2018, when Australia barred Huawei Technologies Co. from building its 5G network, and went into freefall last year as Prime Minister Scott Morrison led calls for an independent probe into the origins of the coronavirus that first emerged in the Chinese city of Wuhan. Beijing has responded with a volley of punitive trade actions that have hit commodities from coal to barley, lobsters and wine.

The U.S. “has made it very clear that they won’t leave us on the playing field alone,” Tehan said. “We are examining ways they can help and support us. Obviously no country wants to be on the receiving end of economic coercion.”

(Updates with comments from Tehan in final paragraph.)