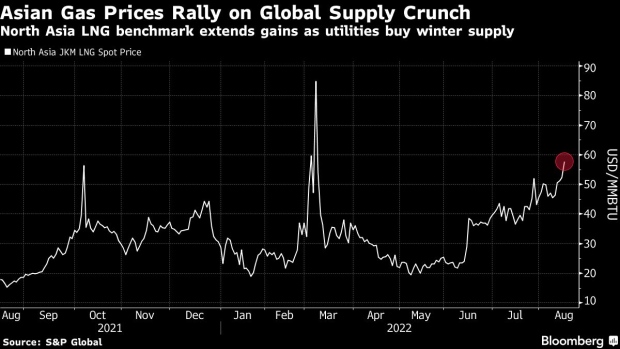 A chimney of the Unit 5 and the Unit 6 of Jera Co.'s liquefied natural gas (LNG) fired power plant during a media tour at the company's Anegasaki Thurmal Power Station in Ichihara, Chiba Prefecture, Japan, on Wednesday, June 22, 2022. Jera, a joint venture between Tokyo Electric Power Co. (Tepco) and Chubu Electric Power Co., won the bid in a public auction to supply additional power during this summer. Homes and businesses are being asked to conserve electricity to help avoid blackouts during a squeeze on global energy supplies. Photographer: Akio Kon/Bloomberg , Bloomberg

(Bloomberg) -- A global rush to secure shipments of liquefied natural gas for winter catapulted Asian prices to the highest level in five months.

Russia’s move to curb gas shipments to Europe is sending prices of the power plant and heating fuel surging around the world. Utilities in Asia and Europe are accelerating efforts to secure LNG spot cargoes for delivery in winter, when consumption peaks, which is exacerbating a shortage and fueling the rally in prices.

Several Japanese utilities are currently in the market to procure more LNG shipments for delivery from December onward, according to traders with knowledge of the matter. Korea Gas Corp., one of the world’s top buyers of the fuel, is also seeking to scoop up more winter supply, traders added.

Meanwhile, supply disruptions from Australia to the US are curbing the amount of available LNG. Several companies, including Uniper SE and Marubeni Corp., were bidding for LNG shipments to Asia during S&P Global’s market on close process on Tuesday, traders said.

The Japan-Korea Marker jumped to $57.728 per million British thermal units on Tuesday, more than triple the level this time last year, according to S&P Global. European gas prices settled just below a record high on Tuesday amid scorching summer heat.