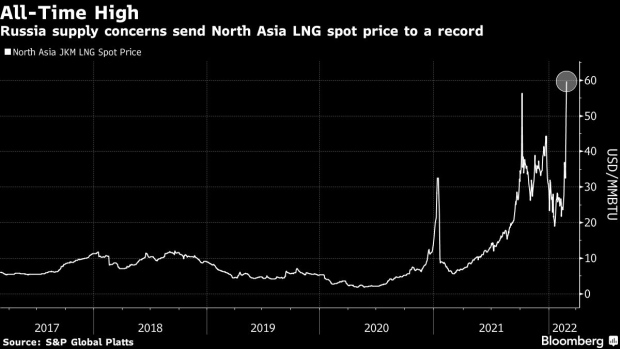 The Japan-Korea Marker, the spot Asian LNG benchmark, jumped 23% to $59.672 per million British thermal units on Thursday, according to S&P Global Platts, pulled higher by a historic rally in European gas prices.

“Panic spread through the international gas markets over supply availability due to the Russia-Ukraine conflict,” according to S&P Global Commodity Insights.

While only a handful of Asian importers are currently seeking spot LNG cargoes, they will need to pay sky-high rates to attract shipments away from Europe, according to traders surveyed by Bloomberg.

Russia’s invasion of Ukraine and sanctions aimed at Moscow have added risk to an already tight global gas market. The conflict has upended commodities, with the world already in the grip of inflation amid the recovery from the pandemic.

Asian LNG buyers are avoiding further purchases from Russia due to the quickly evolving wave of sanctions from the West, which is further tightening global supplies. Suppliers are adding clauses to spot contracts that allow buyers to turn down shipments from Russia.

Still, the sudden surge in Asian LNG prices is beginning to spark demand destruction, as many importers are unable to purchase cargoes at current rates. The JKM spot rate is trading at roughly a $5 discount to Europe, the biggest discount since January amid “fears over Asian LNG demand being able to be sustained at today’s price levels,” according to Platts.

The Asian spot price has roughly doubled in the last week, with Thursday’s level surpassing the previous record set in October amid fears of a tight winter.