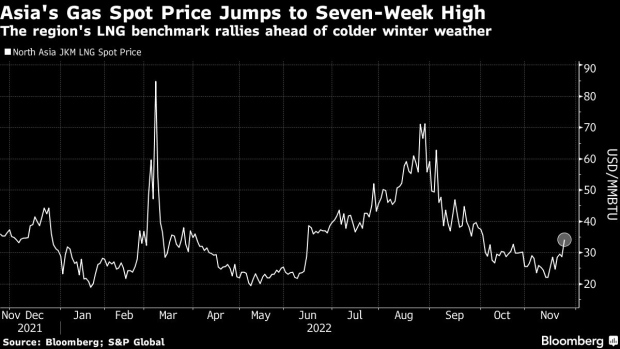 (Bloomberg) -- Asia’s liquefied natural gas spot price rallied to the highest level since early October on concern disruptions to production and the arrival of colder weather in key markets will further tighten supply.

The Japan-Korea Marker, North Asia’s LNG benchmark, jumped 20% in the week to Wednesday to $34.24 per million British thermal units, according to traders citing an assessment from S&P Global. An ongoing outage at a key US export plant and forecasts for frigid weather in Europe are seen boosting global competition for the fuel this winter and potentially curbing shipments to Asia, the traders said.

While North Asia LNG importers, like Japan and China, are optimistic that they’ve secured enough fuel for winter, supplies remain tight and a sudden cold snap in those nations could quickly deplete inventories. Meanwhile, Asia is in direct competition with energy-starved Europe for a dwindling amount of available LNG.

Prices are also being pushed higher by Shell Plc, the world’s biggest LNG trader, which has been bidding to secure spot shipments for delivery to China in January.

--With assistance from Ann Koh.