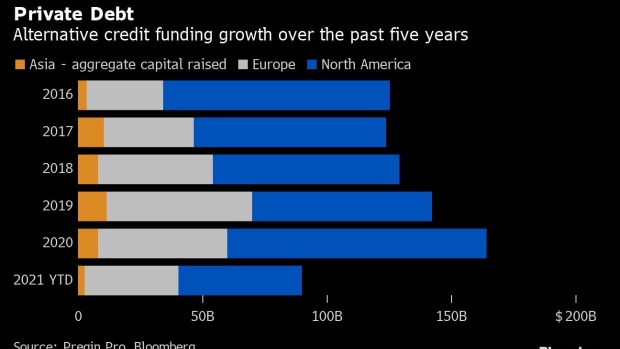 A construction worker labors on the scaffolding of a building at an under construction residential housing development in Shanghai, China, on Thursday, July 29, 2021. Chinese policy-making bodies collectively issued a three-year timeline for bringing “order” to the property sector, long under scrutiny due to an excessive buildup of leverage among home-buyers and developers. Photographer: Qilai Shen/Bloomberg , Bloomberg

(Bloomberg) -- Asia’s nascent private credit industry is getting a shot in the arm as alternative asset manager Ares SSG launches its biggest secured lending fund in the region.

Designed to provide secured loans to businesses in Asia Pacific, the fund has raised more than $1.6 billion and is double the size of its predecessor closed in 2017, according to a statement from Ares SSG. That’ll add to the $2.7 billion in private debt raised in the region so far this year, Preqin Pro data shows.

Private credit, which allows borrowers to bypass banks and enjoy more flexibility, started taking off in 2017 in Asia but has suffered a pandemic-induced slowdown since last year. The year-to-date amount of such lending in the region also pales before Europe’s $37.7 billion and North America’s $49.5 billion, respectively.

Founded in 2009, Ares SSG had approximately $7.5 billion of assets under management as of June 30.