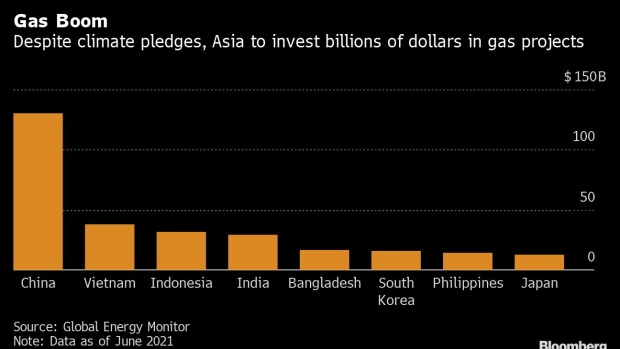 Storage silos stand at the liquid natural gas (LNG) terminal at the Yangshan Deep Water Port in Shanghai, China, on Tuesday, Feb. 4, 2020. Chinese officials are hoping the U.S. will agree to some flexibility on pledges in their phase-one trade deal, people familiar with the situation said, as Beijing tries to contain a health crisis that threatens to slow domestic growth with repercussions around the world. , Bloomberg

(Bloomberg) -- Asia is pumping billions of dollars into new gas infrastructure, making the region pivotal in a debate over the role of the fossil fuel as the world aims to curb emissions.

The region has more than $350 billion of projects under way to expand liquefied natural gas terminals, gas-burning power plants and pipelines -- triple the estimated investment for Europe -- according to data from Global Energy Monitor.

That boom is aimed at allowing economies including China, the Philippines and Vietnam to avoid burning more coal, although it still risks locking in the use of fossil fuels for decades and could slow some deployments of renewable energy.

Asian governments are seeking the same benefits the U.S. and Europe have enjoyed from gas for decades -- the fuel can heat homes, cook food and power factories at all hours of the day, while also cleaning up urban smog. But while it produces half the carbon emissions of coal, there’s a growing consensus that gas use must shrink for the world to stave off the worst effects of climate change.

“There definitely is a role for gas,” and particularly in displacing coal, Mark Carney, the former Canadian and U.K. central bank governor who’s now a special envoy on climate action for the United Nations, said at the Asia Sustainable Finance Forum in Seoul last month. “But we always need to keep in mind the ultimate horizon for any source of energy given its carbon footprint.”

The UN on Monday added another measure of urgency to efforts to phase out fossil fuels, warning that the world may be on track to warm by more than 3 degrees Celsius, twice the Paris Agreement target.

While Asia is the largest energy-consuming region and home to most of the world’s population, its gas market accounted for about the same amount of consumption as the U.S., according to BP Plc data.

The potential for massive further growth is why the expansion of gas infrastructure in Asia is concerning, said Robert Rozansky, a research analyst at Global Energy Monitor. If all proposed projects identified by the nonprofit’s research -- which assessed gas developments planned as of June 2021 -- are built as planned, global LNG importing capacity would jump by 50%.

Decision makers would be mistaken if they assume gas will be cheaper and more stable than renewables and energy storage over the long run, Rozansky said. “These assumptions are outdated or will be long before the end of a 20-year LNG contract,” he said.

Nations and companies are grappling to secure enough gas amid a global power crunch as economies recover from the pandemic. The war in Ukraine has added a new dimension, increasing the need for LNG supplies and sending prices to record levels, which may complicate plans by cash-strapped emerging nations seeking to shift to the fuel.

China is slated to invest more than any nation in natural gas infrastructure as Beijing seeks to reduce dependence on coal and peak emissions this decade. The world’s top LNG buyer has 30 import projects currently under construction, with tentative plans for another three dozen, according to data compiled by BloombergNEF.

South Korean companies including Posco Energy Co., SK E&S Co. and state-run Korea National Oil Corp. are adding LNG facilities that they say could later be re-purposed for the transportation and storage of hydrogen, a developing source of low or zero-emissions energy.

Advocates insist that gas-fired power will ultimately support the adoption of renewables by helping to smooth out fluctuations in clean energy generation.

The firm will bring the Philippines’ first LNG import terminal into operation from July and has already begun an expansion that’ll lift capacity by 2023.