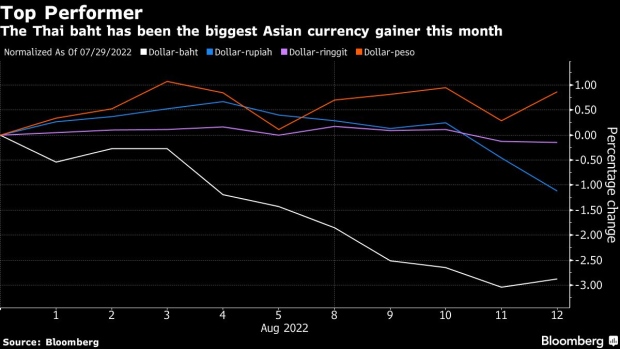 The portrait of Thai King Maha Vajiralongkorn is displayed on 1,000, from left, 500, 100, 50 and 20 baht banknotes in an arranged photograph in Bangkok, Thailand, on Wednesday, Sept. 12, 2018. The baht has been a stand-out currency amid the recent rout in emerging markets. It's appreciated 1.5 percent against the dollar so far this quarter, the best performer among major Asian currencies and the only gainer among them. Photographer: Brent Lewin/Bloomberg , Bloomberg

(Bloomberg) -- Thailand’s baht rebounded so rapidly in the past few weeks on optimism about the country’s tourism-led growth that it’s already hit year-end analyst targets.

The currency jumped 2.3% to about 35.45 per dollar this month, leading gains in Asia by a wide margin. In addition to rising forecasts for tourists arrivals, the advance is also being driven by a narrowing current-account deficit due to falling oil prices.

The surge means the baht has already touched the 35.2 level forecast for the fourth quarter by analysts surveyed by Bloomberg. The rapid gains also feed into the debate over whether the dollar has peaked, as analysts start to weigh in on the right time to return to emerging markets, which had seen capital outflows as the US embarked on aggressive rate hikes.

“We expect more upside for the Thai baht though we are cautious about jumping in at current levels given the sharp rally over past weeks,” said Mitul Kotecha, head of emerging market strategy at TD Securities in Singapore. The currency’s rebound was driven by a combination of dollar weakness, the Thai central bank’s policy shift, signs of a recovery in tourism and firmer economic data, he said.

Moves in the baht on Monday highlighted how it’s still vulnerable to global economic uncertainties. The currency declined 0.5% during the day, the biggest drop in more than three weeks after China cut key interest rates and after a report showed economic growth was weaker than economists had estimated.

Thailand’s gross domestic product rose 2.5% in April-June from a year earlier, below the median estimate for a 3.1% expansion in a Bloomberg survey.

Earlier this month, a government spokesman said the nation expects to attract 10 million international tourists this year, compared with the 6.1 million forecast in April. Visitors are seen rising to 30 million people next year, still shy of the 40 million who traveled to the country in the year before Covid spread.

That rebound is important for Thailand, considering that the travel-related sector accounted for about a fifth of the nation’s economy before the pandemic.

The government’s decision this month to downgrade Covid-19 to the same category as influenza is another positive factor, as it suggests that the nation’s public health outlook is stabilizing.

Meanwhile, the Bank of Thailand’s first rate hike in more than three years last week failed to give a strong boost to the baht, as policy makers signaled their future moves will be gradual, at a time when the US Federal Reserve is pushing ahead with big rate increases. The currency actually fell after the policy move before ending the day a bit stronger.

Oversea-Chinese Banking Corp. cautions against chasing the dollar-baht lower “when a rapid pace of recovery is yet to be confirmed, while the BOT is lagging in terms of policy tightening,” according to Frances Cheung, rates strategist at the bank in Singapore.

Still, positive signs such as better economic data have led some analysts to forecast a tad more scope for the baht to rise after recent gains.

Malayan Banking Bhd strategists including Saktiandi Supaat predicted the baht will rise to 34.80 in the first quarter of 2023. Scotiabank FX strategist Qi Gao expects the Thai currency to fluctuate in a range of 35 to 36, with the possibility of breaching the lower number going forward.

Goldman Sachs Group Inc. maintains its bullish outlook on the baht and expects it to outperform non-Japan Asian currencies in the second half of the year, strategist Kamakshya Trivedi wrote in a note dated Aug. 5. He cited the tourism rebound, dip in oil prices and lower freight costs.

(Updates with baht decline on Monday in 5th paragraph.)