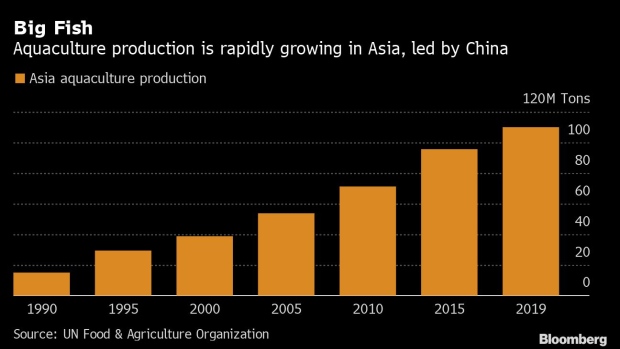 Workers haul a pen net onto the harvest boat at the Kuhlbarra fish farm, operated by Barramundi Asia Pte, off the coast of Singapore, on Tuesday, May 26, 2020. The Singapore Food Agency, set up last year to oversee food safety and security, aims to increase local production to 30% by 2030, from less than 10%. The island is investing in everything from vertical farms to hydroponics and plans to build a sustainable suburb called Tengah. Photographer: Lauryn Ishak/Bloomberg , Bloomberg

(Bloomberg) -- Asia leads the world in aquaculture production but intensive farming has led to an array of environmental challenges that could ultimately pose a risk to human health.

With demand soaring and much of the world’s fish stocks dwindling, almost half of all seafood now comes from aquaculture, with Asia at the center of it. The region accounts for 52% of global fish consumption and dominates production with an 88% share, according to a report by the Asian Development Bank.

While the contribution of aquaculture to economic growth and consumers’ diets is clear, these benefits have been accompanied by environmental and social problems. The damage includes declining agricultural yields as a result of land salinization, frequent outbreaks of shrimp disease and the misuse of prohibited antibiotics to prevent and treat it, which threatens consumer health.

Global fish consumption is surging faster than that of beef, chicken or pork, driven by an expanding and increasingly prosperous global population that recognizes the health benefits of eating seafood. Agricultural giants like Cargill Inc. and JBS SA have made forays into the aquaculture market that’s projected to grow to more than $245 billion by 2027 from $180 billion currently.

Another problem with aquaculture is that feed for farmed shrimp and fish depends heavily on wild-caught fish, further depleting marine resources. The fish processing industry is also often criticized for its treatment of workers, with child labor and substandard conditions under the spotlight. These issues challenge the sustainability of aquaculture, the ADB said.

Much of the focus when it comes to farmed fish is on China, which outproduces the rest of the world combined. Indonesia, India and Vietnam are also big producers, but the concerns are not limited to Asia. Problems persist because the fish farming community typically comprises many smallholders, making it difficult to control good practices.

Innovations and improved regulation can make aquaculture more sustainable, the ADB said. That’s a role for the government and private sector. Modernizing outdated laws and improving technologies and practices can help farmers boost productivity while reducing the negative impact on the environment. This will become even more pressing as the market expands further afield.

“It’s still continuing to grow fast, and it’s expanding to other countries,” Takashi Yamano, senior economist at ADB, said in an interview. “The demand for fish also will continue to expand.”