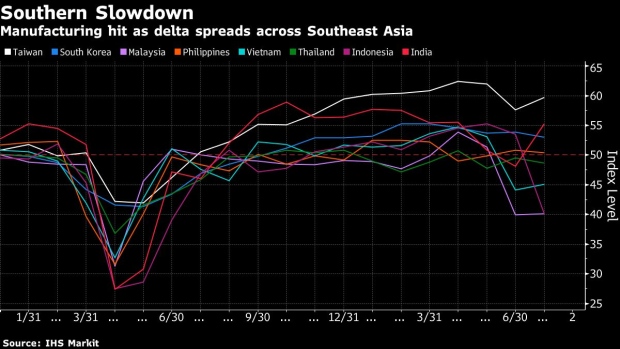 Manufacturing managers in Southeast Asia saw a slump in activity as the region grapples with one of the world’s worst Covid-19 outbreaks, while North Asia continued to see a pick up as the global economy recovers.

In Southeast Asia, which has emerged as one of the world’s worst-hit pandemic areas in recent weeks, Indonesia’s IHS Markit manufacturing Purchasing Managers Index plunged to 40.1 from 53.5, its worst reading in 13 months. Thailand’s fell to 48.7 from 49.5 -- shrinking for a third consecutive month -- while Malaysia’s reading hovered at 40.1 from June’s 39.9, and Vietnam’s PMI stayed in contractionary territory at 45.1 from 44.1.

The data reflect “the resurgence of the virus and restrictions to suppress mobility, which impacts economic activity,” she said. “Beyond the decline of domestic demand, for countries like Vietnam the shutdown of industrial areas will show in the export number as plants are shuttered.”

The Philippines was the only emerging economy in Southeast Asia in expansionary territory, at 50.4 versus the previous month’s 50.8. In South Asia, India witnessed a rebound in factory activity amid easing of virus curbs. As a result, the PMI climbed to 55.3 in July from 48.1 a month ago, according to IHS Markit.

Manufacturing in Southeast Asia may face even darker days ahead as some governments are enforcing fresh lockdowns to subdue the spread of the delta variant. Factories in Vietnam have been shuttered to meet new restrictions, while some of those that have continued to operate are seeing outbreaks among workers. Thailand is also bracing for closures, while industry groups in both countries are seeking help procuring vaccines for their workforces.

“Southeast Asia’s weak PMI readings continue to mirror heavy Covid cases and slow vaccine progress. That suggests more cuts ahead in the growth outlook for most economies in the region.”

A gauge covering Southeast Asia as a whole slumped to a 13-month low at 44.6 in July, down from 49.0, signaling a further deterioration in conditions across the region’s manufacturing hubs. A figure above 50 indicates activity is growing, while a number below 50 reflects a contraction.

“The resurgence of Covid-19 cases and subsequent tightening of some containment measures saw demand slump further, with factory production contracting at the fastest pace since May 2020 as a result,” IHS Markit economist Lewis Cooper wrote in a note accompanying the data. The readings show “manufacturers are likely to face more challenges in the coming months. Containment measures have once again stifled demand, and until it recovers, it is unlikely that the sector will record any significant rebound.”

Meanwhile, the IHS Markit PMI for Taiwan surged to 59.7 in July from June’s 57.6, while a Japanese gauge from IHS Markit and au Jibun Bank rose to 53 from June’s 52.4, the sixth straight month of expansion. South Korea’s PMI showed continued expansion, at 53 from June’s 53.9, but was the weakest reading since December, with new orders at their lowest level since January.

The spread of the delta variant and vaccine distribution have been “a huge headache” for Southeast Asia, Johanna Chua, chief Asia-Pacific economist at Citigroup Global Markets, said in a Bloomberg Television interview. Meanwhile, strong demand for electronic components, particularly chips, is driving the expansions in Taiwan and South Korea, she said.

The Markit readings Monday follow data Saturday that showed the pace of China’s economy recovery continuing to ease, with the official manufacturing purchasing managers’ index for June at 50.4, down from 50.9 and below the 50.8 estimate, while the non-manufacturing gauge slipped to 53.3, in line with expectations.

A separate gauge from China on Monday, which includes more smaller manufacturers, showed a 17th straight month of expansion. Still, the release from Caixin Media and IHS Markit fell to 50.3 from 51.3 in June, its lowest reading since April 2020.

Going forward, reopening in western countries as their vaccination campaigns progress may erode one important source of momentum for Asia.

“Strong global demand for electronics, which has proved a key driver of industrial output, will probably soften further ahead as vaccines help a shift back to normality in key export markets,” Alex Holmes, Asia economist at Capital Economics Ltd., wrote in a research note. “Alongside the continued headwinds from virus outbreaks, this means that industry is unlikely to provide nearly as big of a boost to GDP growth as before in the coming quarters.”

(Updates with India data in the fifth paragraph)